Punarnava is diuretic used to treat urinary problems, very good for liver and very effective in jaundice and urolithiasis. This is tonic for heart, liver and kidney. Learn how to use this in different health problems.
Anupama November 28, 2016 December 31, 2020

Punarnava is a very important medicinal herb of Ayurveda. Its name is derived from two words, Punar (= once again /regaining/restoring) and Nava (=new, renew or young), so the literal meaning of the name is, one which becomes new or young again. This name signifies the rejuvenating property of Punarnava. It is a Rasayan herb of Ayurveda that renews the body or restores youth. 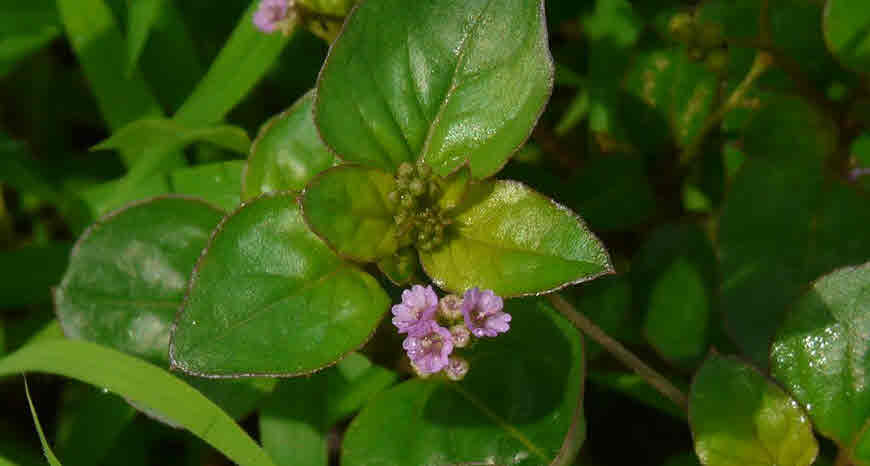 In Ayurveda, Punarnava is considered bitter, cooling, and pungent. It acts on plasma, blood, muscles, fat, nerves, and reproductive organs. The herb exhibits significant anti-inflammatory, laxative, and diuretic action along with stomachic, expectorant, rejuvenative, diaphoretic, and emetic properties. It is one of the best herbs used for diseases of the liver and kidney. It is very effective in the treatment of dengue fever and very good for curing jaundice and hepatitis b. It is prescribed for urinary problems, kidney-bladder stones, kidney disorders, enlargement of the liver, cirrhosis of the liver, jaundice, dropsy, edema, and similar inflammatory conditions.

Due to its potent anti-fibrinolytic and anti-inflammatory properties, it is used in menstrual disorders like menorrhagia, dysmenorrhea and to stop intrauterine contraceptive device (IUCD) induced bleeding. The anti-inflammatory and analgesic properties of Punarnava is comparable to that of ibuprofen.

Punarnava is a diuretic and decreases urinary albumin, urinary protein excretion, and specific gravity. It is also a urinary antiseptic. The root decoction is recommended for the treatment of urolithiasis. This common medicinal herb is a tonic for the heart, liver, and kidney. It increases plasma insulin levels and improves glucose tolerance, produces significant antioxidant activity.

Whole plant or the roots of Punarnava are used along with other ingredients for the preparation of medicines for anemia, jaundice, asthma, cough, colic, enlargement of the liver, piles, abdominal worms, acute leprosy, heart disease, fistula, blood and skin diseases, anasarca, the liver and spleen diseases, strangury, retention of urine, etc. It is taken along with Gokhru for kidney disorders. It enhances antibody response and reduces Pitta and Kapha.

The leaves and roots of the plant are eaten as vegetables for better health. The plant is cooling and helps to reduce excessive heat in the body.

For medicinal purposes, the juice, decoction, infusion, powder, or paste of the plant are used. During the rainy season, the plant is abundantly available and can be used fresh. Otherwise, the capsules and root powder are also available in the market.

The leaves are simple, opposite in unequal pairs. The larger leaves are 2.5- 3.7 cm long, smaller ones 1.2- 1.8 cm long, broadly oval or subrotundate, rounded or subcordate at base, rounded at apex, entire, somewhat undulate, glabrous and green on the upper surface.

All plants are scientifically classified into main 7 levels. These levels are the Kingdom, Division, Class, Order, Family, Genus, and Species. A genus comprises many species and the botanical name consists of Genus (uppercase) followed by Species (lowercase). Genus consists of many species that are closely related and have lots of similarities. Species is the lowest level and represents the group of the same plant.

The botanical name of Punarnava is Boerhavia diffusa. Boerhavia Genus’s name is given in honor of Hermann Boerhaave, a famous Dutch physician of the 18th century, and diffusa indicates the spreading nature of the plant.

Genus Boerhaavia consists of 40 species distributed in tropical and subtropical regions and warm climate. Among 40 species of Boerhaavia, 6 species are found in India, namely B. diffusa, B.erecta, B. rependa, B. Chinensis, B. hirsute, and B. rubicunda.

In Ayurvedic texts, two types of Punarnava are mentioned Rakta or Red and Shwet or White. There is no doubt that Rakta Punarnava is Boerhavia diffusa. But the identity of Shvet Punarnava is confusing.

In some books, Trianthema portulacastrum is considered Shveta punarnava as it has a whitish plant body and it is used as the substitute for Boerhavia diffusa or Rakta Punarnava.

But now Boerhavia verticillata has been identified as Shwet Punarnava.

This plant contains large quantities of potassium nitrate and alkaloid Punarnavin. Punarnavoside, a new anti-fibrinolytic agent, has been isolated from the root. Punarnavoside is also reported to have diuretic, anti-inflammatory, and antibacterial properties. A lignan isolated from the roots exhibited a significant calcium channel antagonistic effect.

In Ayurveda, Punarnava refers to the dried, matured whole plant of Boerhaavia diffusa. This medicinal herb is used since ancient times to treat various ailments. The mention of the plant is found in Charaka Samhita and Sushruta Samhita.

Punarnava is astringent, bitter, sweet in taste (Rasa), sweet after digestion (Vipaka), and is cool in effect (Virya). It is a Sheet Virya herb. Sheet Virya or Cool potency herb subdues Pitta (Bile) and Vata (Wind), gives nourishment to the body, and supports the building of the body fluids.

Boerhavia diffusa is rich in medicinal properties. The understanding of these properties will help us to better utilize this herb. It has significant anti-jaundice properties and is an effective medicine for liver diseases and edema.

Below are given medicinal properties along with the meaning.

Boerhavia diffusa or Punarnava grows as a weed in wastelands. But it is a valuable and effective medicine. It protects and heals the liver and kidney and reduces body heat. It is an excellent rejuvenator that gives strength to organs.

Punarnava has significant diuretic properties due to which it is effective in the treatment of urinary diseases, water retention in the body, oedema, swelling, and other condition that are caused due to accumulation of water in the body cavities.

There are many studies that confirm the effectiveness of the whole plant and root decoction of Punarnava to expel kidney stones. In the case of stones, equal quantities of Punarnava roots and Gokhru seeds are boiled in water and taken empty stomach.

Punarnava is either a single drug or in combination with other herbs. The paste of the plant, decoction of roots, or decoction of the whole plant is given as a medicine. The leaf extracts have hepatoprotective, antioxidant, antinociceptive, antibacterial, and antidiabetic properties. Root parts show potent alternative, cardiac Tonic, hematinic, laxative, expectorant, and diuretic properties.

A paste of roots + milk is applied topically.

The plant/root powder is taken for one week.

The whole plant of Punarnava + seeds of Gokhru / Tribulus Terrestris + Puttura / Aerva lanata is made into a decoction and given internally.

Punarnava + Giloy decoction is given.

The root decoction is given with sugar and milk at night after food.

The root powder is given to stop diarrhea.

The leaves are eaten as vegetables.

The roots are consumed in large doses (above 5 grams).

The decoction of the whole plant is taken in a dose of 50-100ml.

The root powder is taken in a dose of 3 grams.

Punarnava root powder/ decoction is given.

Whole plant decoction is given.

Leaves juice is given.

A paste of the root can be applied on oedematous swellings.

The root powder is taken in a dose of 3 grams with Go mutra.

Boil half teaspoon roots in a cup of milk. Filter and drink.

A hot poultice of the root can be applied.

The whole plant of Punarnava + seeds of Gokhru / Tribulus Terrestris + Yava / Barley / Hordeum vulgare is made into a decoction and given internally.

Urinary infection, kidney problems, and water or edema in hands and legs

The whole plant of Punarnava + seeds of Gokhru / Tribulus Terrestris + Kokilaksah / Asteracantha longifolia is made into a decoction and given internally.

The Dosage of Boerhavia diffusa