Scientific studies support the fact that giloy has ability to reduce dengue fever, improve platelet count and liver protecting properties. Lean how you can use giloy with punarnava to treat dengi fever.
Anupama September 10, 2014 August 12, 2018

Giloy and Punarnava are very well-known medicinal herbs of Ayurveda. Giloy is a tonic that has the ability to cure fever, caused due to any reason. It protects the liver. Punarnava is also herb with the liver protecting action. It is diuretic, reduces swelling of the body, reduces swelling in kidney, antibacterial and antiviral. 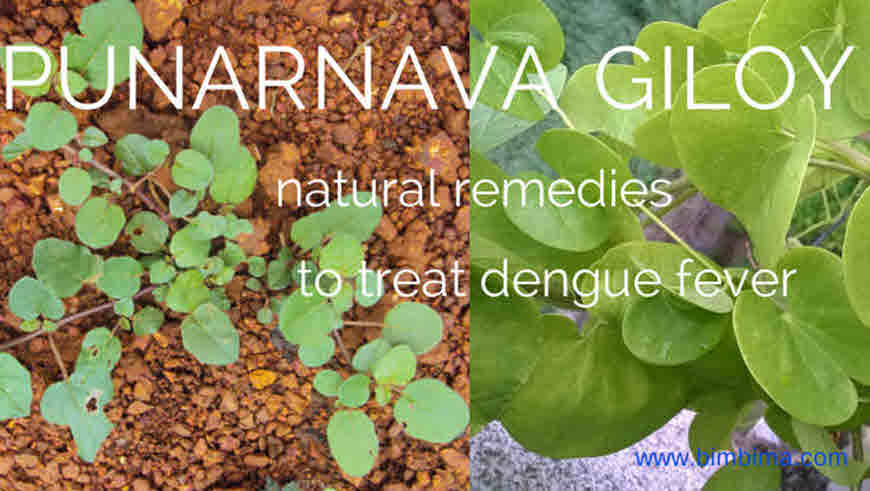 Both the herbs have proven the liver protecting action. Dengue fever badly affects lever and its function. Liver the body’s second largest organ, is responsible for digestion through bile production. It also detoxifies chemicals and metabolizes drugs. Liver secretes bile that ends up back in the intestines. This organ also makes proteins important for blood clotting and other functions. The combination of giloy and punarnava protects the liver and helps to cure dengue effectively.

This a combination of herbs, during initial stages of dengue fever, effectively cures the fever and also improves the platelet count. In modern medicine, for the treatment of dengue fever reducing medicines, antibiotics and support is given. There is no particular medicine available in Allopathy that is given for dengue treatment.

Perhaps Ayurveda has an answer. Ayurveda is Science that is time tested.

People may be sceptical about effectiveness of this treatment. They may think where modern medicine has no cure, how plants can help.

But the truth is, even scientific studies support the fact that giloy has the ability to reduce dengue fever, improve platelet count and the liver protecting properties. Do not be sceptical, but find Giloy and use it for the treatment of fever. In fact it can be used to treat fever due to any reason.

A study to see the effect of Giloy and Punarnava in dengue, was conducted on three patient. They were having confirmed dengue with fever and platelet count of 50, 000-60, 000. All three were treated using giloy and punarnava. Patients were given the medicinal preparation and examined after 24 hours, the platelets count were above 85, 000 and have normal body temperature. Again after 24 hours they have normal platelets count and no symptoms of dengue.

The study concluded, Giloy and Punarnava cures dengue in early stages without any side-effects. After observing patients, it is also concluded that platelets are increased in significant manner and lower down the body temperature. If platelets are too much low then serve this preparation at least 4-5 times a day.

Preparation of Giloy and Punarnava for dengue

The medicines was prepared by the stems of giloy (10 gm) and the plant of Punarnava (10 gm). Both are crushed in pastel and mortar. Boil 160 ml of water with crushed mixture of giloy and punarnava till the quantity remains 20-40 ml. Then filter the mixture and add 10 gm of honey in it. This mixture should be taken twice or thrice a day depending upon the condition of patient. While consuming this don’t consume common salt.