Plants contain various phytochemicals which are useful as medicine. In India, the medicinal plants are used for the treatment of various diseases since time immemorial. 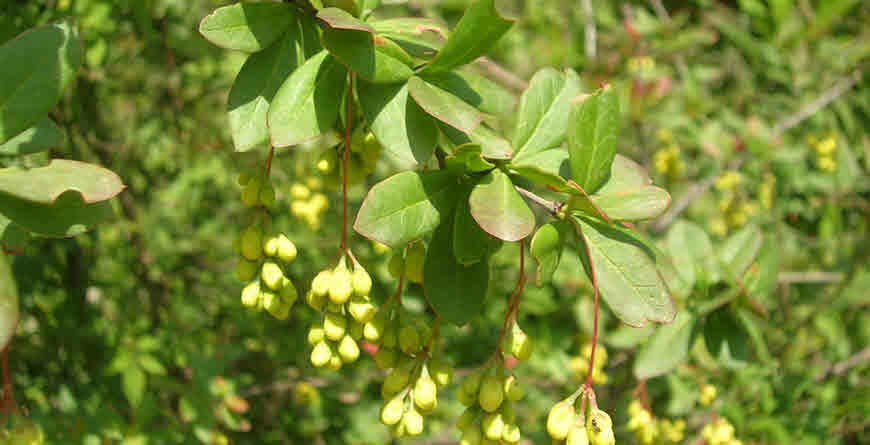 In Ayurveda, various parts of medicinal plants are used internally as well as externally to manage various medical conditions. The Himalayan plants are considered excellent in terms of properties. One such plant, found in great Himalaya is Daruhaldi or Berberis aristata. This plant is used in Ayurveda as well as Chinese medicine. In Homeopathy, the tincture of the root bark of Berberis vulgaris is used for hepatic and rheumatic affections, with urinary, haemorrhoidal and menstrual complaints.

Berberis aristata DC belongs to family Berberidaceae and genus Berberis. This genus has about 12 genera and 600 species worldwide and 77 species have been reported from India.

Berberi aristata can be seen in Uttarakhand and Himachal Pradesh. It is found in the sub-Himalayan tract at the altitude range of 850 to 2500 meter as well as at Nilgiri and Sri Lanka.

Berberi aristata is a spinous shrub with hard, yellowish parts. The plant is also a source of dye and tannin which is used for dyeing clothes and for tanning leather.

Racemes: simple, about as long as the leaves, spreading; pedicels stout.

Berberine is the main constituent of Berberis aristata and it is found in roots, rhizome and stem bark. Berberine has antioxidant, anti-inflammatory, antimicrobial, antiprotozoal, antidiarrheal and anti-trachoma activity. Berberine improves insulin sensitivity and promotes regeneration and functional recovery of β-cell.

The roots of the barberries are dug up and washed to remove all earth and foreign matter. They are then cut up into small pieces, then 4 tolas of this are boiled in half a seer of water until reduced to a mass weighing 8 tolas. The boiling goes on for about six hours. As water evaporates fresh water is poured in so as to keep the chips aiwavs well covered.  Then add to it eight tolas of goat’s milk, and boil again into a solid mass. This mass is Rasot.

Rasot is used in diseases of the mouth, swollen gums, skin diseases, and leprosy.

Daruhaldi mainly acts on the circulatory, digestive and excretory system. It reduces Kapha dosha due to its hot pungent nature but increases Vata Dosha. The bitter flavor reduces, dries and drains ama. It regulates the liver and clears high pitta from the system.  It is an ingredient of Asvagandhadyarista, Bhrngaraja taila, Khadiradi gutika, Khadirarista, Jatyadi taila, and Triphala ghrita.

Berberi aristata extract and decoctions are used traditionally against various diseases caused by bacteria, viruses, fungi, protozoans, helminthes and chlamydia due to significant antimicrobial action. It is useful in bacterial diarrhea, intestinal parasite infections as it inhibits the intestinal secretory response of Vibrio cholerae and Escherichia coli enterotoxins.

How to Use Berberis aristata?

A paste of flower, leaves, and bark is applied to cure edema.

Soak overnight 5 grams of coarse powder of Daruharidra in 100 ml of water.

Boil the mixture till half of the water remains and filter it. Use the filtrate at room temperature to irrigate the inflamed eye.

2 ml of the filtered decoction mixed with an equal quantity of pure honey is used as an eyedrop. Put 1 to 2 drops in each affected eye 4 to 6 times a day at regular intervals.

Make a decoction of rasaut (1 cup), add honey and drink.

Grind leaves of Daruhaldi and apply on the affected areas.

Make a decoction of Daruhaldi roots (5 gm), dried giloy (5 gm) and few basil leaves in water (400 ml). When the water reduces to one-fourth filter and drink. Take this decoction twice a day. Do this for a few days. This cures chronic fever due to any reason.

It also has a positive effect on liver function.

Take roots (5 gm) of Daruhaldi. Make a decoction by boiling in water (400 ml) and take twice a day. This is beneficial in both types of piles.

Rasaut can also be used for piles treatment. For this dilute rasaut in thirty times water and wash the affected areas. Also, take rasaut (1/8 tbsp) in butter (1 tbsp).

Grind Rasaut and mix with honey. Make the child lick this to cure stomach infections.

Side effects of Berberis aristate

Higher doses may interfere with vitamin B metabolism.