There are many poisonous plant parts which are used in Ayurveda for medicinal purpose. Such plants generally grow in the wild (mainly in tropical areas) or are used for ornamental purposes. It is important to have knowledge about such plants to avoid any kind of mishappening. 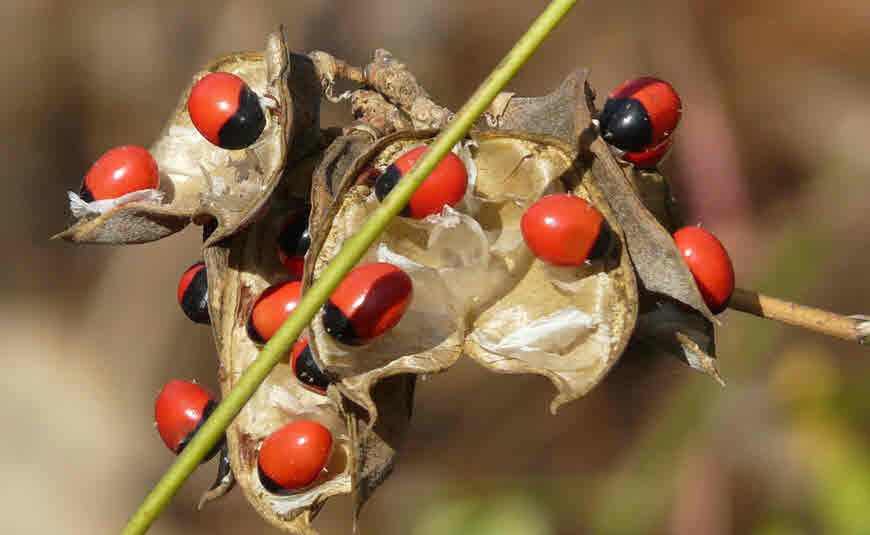 The poisonous plant parts are not used in raw form in Ayurveda but only after proper detoxification. The detoxification techniques are called Shodhan and are given in detail in classical Ayurvedic text.

Abrus precatorius is also a medicinal plant that bears poisonous seeds. The seeds look beautiful.  They have a bright red color with the black spot and used for decorative purposes (e.g., bracelets or necklaces). Each seed is about 8mm in length and 6mm in breadth, the average weight of is approximately 105mg.

In Ayurveda, the seeds are used only after they have been boiled in cow’s milk for 3 hours.

There is extremely toxic toxalbumin (protein) found in the seeds known as Abrin. Abrin is similar to ricin (in structure and properties), a toxin that also is found in the seeds of a plant (the castor bean plant). The ingestion of seeds results in poisoning. Significant toxicity is not expected after ingestion of intact or whole seeds.  Nausea, vomiting, diarrhea and abdominal pain may develop. But if the seed cover is removed or seed is not intact then Nausea, vomiting, and diarrhea generally develop within hours. This may lead to volume depletion and hypotension. Severe irritation of the GI mucosa may develop, which may result in gastrointestinal hemorrhage and sloughing of tissue. Electrolyte abnormalities and Fever may occur.  Other systemic effects such as hepatic and renal damage, decreased mental status, coma and seizures may be delayed several days after ingestion of Abrus precatorius seeds.

Abrin is a natural poison found in the seeds of rosary pea or jequirity pea or Abrus precatorius. These seeds are red with a black spot covering one end. The seeds are used to make jewelry or rosaries.

Severe poisoning among adults, following the intake of one half to two seeds, as well as cases of death among children after consuming two seeds, have been recorded.

There is no specific antidote available for Abrin.

The major symptoms of abrin poisoning depend on the routes of exposure and the dose. for Human, toxicity Values after oral consumption by is approximately 0.005-0.007 mg/kg.

The abrin content in a single Abrus precatorius seed is approximately 0.15%. Though there is a case report of death following ingestion of a single bean, there are also reports of survival after ingestion of multiple abrin beans as the toxic effects of toxalbumin may depend on age and health.

If abrin is inhaled then symptoms could be respiratory such as difficulty breathing.Fever, cough, nausea, and tightness in the chest, heavy sweating, fluid building up in the lungs (pulmonary edema) is also possible. Fluid build up in the lungs makes breathing more difficult, and this causes the skin to turn blue.

Excess fluid in the lungs would be diagnosed by x-ray or by listening to the chest with a stethoscope. Low blood pressure and respiratory failure may occur, leading to death.

In case a person chews the seeds of plant then it leads to vomiting and bloody diarrhea. Severe dehydration may be the result, followed by low blood pressure.

Other signs or symptoms may include hallucinations, seizures, and blood in the urine. Within several days, the person’s liver, spleen, and kidneys might stop working, and the person could die.

Abrin in the powder or mist form can cause redness and pain of the skin and eyes. Death from abrin poisoning could take place within 36-72 hr of exposure, depending on the route of exposure (inhalation, ingestion, or injection) and the dose received. If death has not occurred in 3-5 days, the victim usually recovers.

Abrin poisoning is treated by giving supportive medical care to minimize the effects of the poisoning. The types of supportive medical care would depend on several factors, such as the routes by which victims were poisoned (inhalation, ingestion, or skin or eye exposure). Care could include such measures as helping victims breathe, giving them iv fluids, giving them medications to treat conditions such as seizure and low blood pressure or washing out their eyes with water if their eyes are irritated.

What to do if exposed to Abrin?

Abrin in the powder or mist form can cause redness and pain of the skin and eyes. In such case do following:

As there is no antidote to Abrin poisoning, treatment is symptomatic and consists of the gastrointestinal decontamination and supportive care with special attention to fluid and electrolyte management and avoidance of shock.

Due to toxicity Abrus Precatorius should not be used as a herbal medicine.