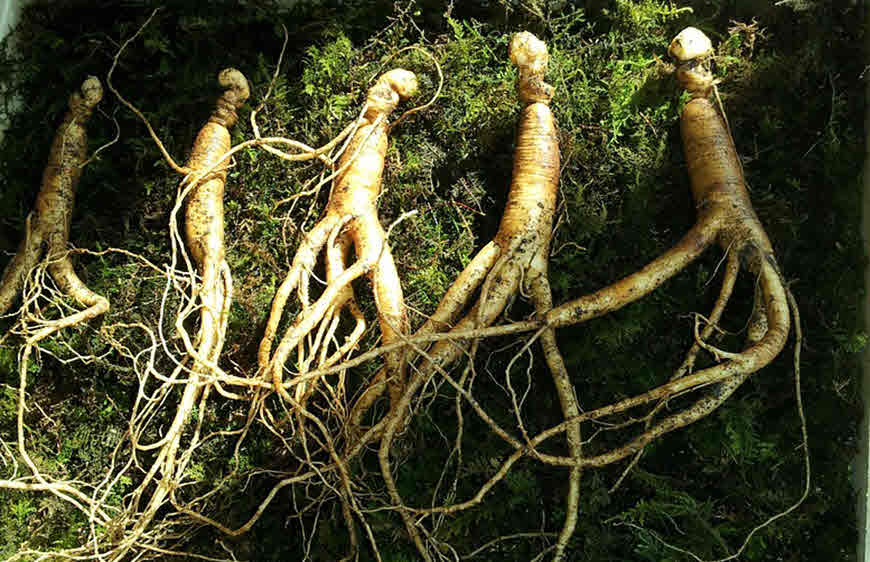 Korean Ginseng is used to promote good overall health, and boost the immune system. It improves stamina, and mental, and physical performance.

Ginseng is beneficial for men as it promotes libido, and performance. It helps in erectile dysfunction, hepatitis C, and symptoms related to menopause.  When taken in an appropriate dose, it lowers blood glucose, and controls blood pressure.

Short-term use in recommended dose, Koran Ginseng appears to be safe for most people. Excessive and/or prolonged use might cause side effects. The most common side effects are headaches, and sleep, and gastrointestinal problems. Some people can be allergic to it.

Panax ginseng is indigenous to China. It is cultivated in China, Korea, Japan, and Russia.

Unless otherwise prescribed, daily dose (taken in the morning): dried root 0.5–2 g root. To make an infusion, pour boiling water over roots, and strain after 5 to 10 minutes.

In one clinical study, 90 patients with erectile dysfunction were treated with ginseng saponins (600 mg orally per day). This Treatment improved rigidity, tumescence, and libido.  The saponins have shown enhancement of erectile capacity mediated by endothelium-derived relaxing factor, and peripheral neurophysiologic enhancement.

Korean Red Ginseng given orally as 600 mg three times daily has been effective in Erectile Dysfunction.

Korean Ginseng promotes an overall improvement in physical, and mental performance. It is adaptogenic due to the presence of ginsenosides. It produces a non-specific increase in the body’s own defenses against exogenous stress factors, and noxious chemicals.

Protects from damage by stress

Korean Ginseng resists the damaging effects of various stressors most likely through the hypothalamus–pituitary– adrenal axis.

The immunomodulatory activity is also present in ginseng.

Intake of Ginseng brings Improvement in physical, and mental performance, and in learning ability.

Ginsenosides Rg1, and Rb1 are the active nootropic constituents of the Ginseng. It causes vasodilatation, which improved brain, and coronary blood flow. Oral standardized Ginseng 400 mg daily was effective in improving cognitive function.

The dosage of 100-200 mg of oral standardized Ginseng has been effective in Type 2 diabetic patients.

Korean Ginseng saponins activate lipoprotein lipase, an enzyme that reduces chylomicrons, and very low-density lipoproteins, and results in a decrease of triglycerides, and cholesterol.

Excessive, and uncontrolled intake of ginseng products should be avoided.

When taken in large quantities, ginseng is reported to result in hypertension, nervousness, irritability, diarrhea, skin eruptions, and insomnia, which were collectively called ginseng abuse syndrome.

Ginseng is not carcinogenic or mutagenic in vitro.

The safety of Ginseng for use in pregnancy has not been established.

Maternal use of Ginseng has been associated with neonatal androgenization, thus it is not recommended for use during pregnancy or lactation.