Skip to content
Home Ayurveda Medicinal use of Harsingar(Night jasmine)

Medicinal use of Harsingar(Night jasmine)

Harsingar flowers (Parijat) are very aromatic and used for making garlands that are used in puja. Harsingar flowers are white and orange in color. The orange colored corolla tubes are separated from flower by local people and dried. This is used for dyeing silk and cotton. 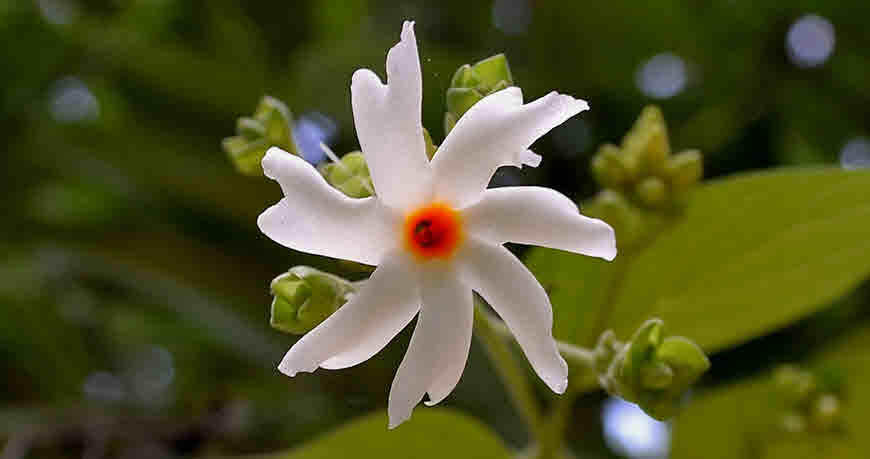 Harsingar is also known by many names such as night jasmine, paarijat. Its botanical name is Nyctanthes arbor-tristis. Parijaat or Harsingar is small ornamental tree with fragrant white flowers. The leaves are given for treating chronic fever, rheumatism, arthritis, joint pain, obstinate sciatica. It is a sacred tree mentioned in Hindu mythology. Mythology says Bhagwan Shri Krishna brought this tree from heaven for his beloved wife Satyabhama. It is one of the five tree that exist in heaven. It is mentioned as Kalpavriksh or wishing tree, which came out of ocean during Samudra manthan. It is a divine tree with numerous medicinal uses.

Parijata is native to India. It is distributed widely in sub-Himalayan regions and southward to Godavari. It is also found in Bangladesh, Indo-Pak subcontinent and South-East Asia, tropical and sub-tropical South East Asia. Night jasmine flowers during August to November and the tree bears fruits in cold season. Parts used for medicinal purpose: Leaves, flowers, seeds and bark.

In Ayurveda, Parijaat is used for the treatment of many ailments. For the medicinal purpose leaves, stem, flowers and seeds are used. The leaves are given for treating chronic fever, rheumatism, arthritis, joint pain, obstinate sciatica. For chronic fever, the fresh leaves juice with honey is administered orally. Leaves decoction or Kadha is recommended to treat sciatica.

In Ayurveda Parijata leaves are extensively used for the treatment of a variety of diseases such as chronic fever, cough, sciatica, rheumatism, parasitic worms, constipation, etc. The leaves juice is bitter in taste and works as a tonic.

White-orange aromatic flowers on oral administration tones stomach, prevents gas formation, astringent to bowel, prevents excess bile secretion by the liver, cures cough. The corolla tube is bright orange in color due to nyctanthin, which is similar to coloring substance of saffron.

The powder of stem bark is useful in the treatment of rheumatic joint pain and malaria. In Orissa, stem bark of Parijata is boiled with dry ginger power and pippali or long pepper. This is taken orally for two days to cure malaria.

For sciatica:Take 3-4 leaves and grind them and boil with water and drain and drink twice in day.

For swelling and pain: Boil leaves in water to make decoction and drink.

For arthritis: Take leaves, bark, flower about 5 gm and make decoction with 200 gm of water. Decoction   is said to be formed when water reduces to ¼ of initial quantity.

For dry cough: Grind leaves in mortar and pestle to extract juice and take it with honey.

For intestinal parasites: Grind leaves in mortar and pestle to extract 2 tbs of juice and take it with misri and water.

For ring worm: Apply paste of leaves on the affected area.

For fever: Take 3 gm bark and 2 gm leaves with 2-3 leaves of tulsi and boil in water and drink 2 times a day.