Kasni is one of the most important herb in Ayurvedic and Unani medicine system. Learn what are it's health benefits and how you can use this to treat different diseases. Know about it's botanical description, medicinal properties and side-effects.
Anupama March 4, 2016 August 12, 2018

Chicory is well-known as a substitute of coffee. The dried roots of the plant are used for this purpose. Chicory has distinct taste but does not contain any caffeine. In 19th-20th centuries, it was used alone but later on it was added to coffee powder or the coffee substitute mixtures. For preparing Chicory powder, the fresh roots are collected, and dried. The dried roots are roasted, and ground to form powder. 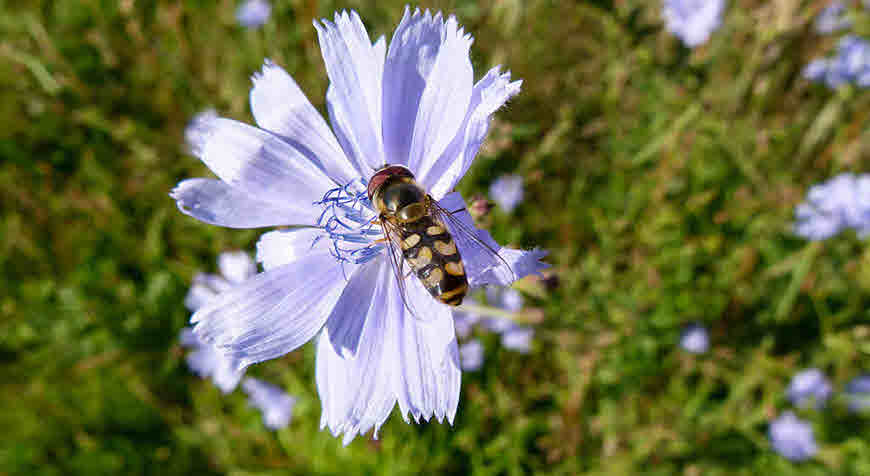 Chicory is a medicinal plant. All parts of the plant especially root, and leaves are used as diuretic, laxative, antipyretic, detoxifying, and the liver tonic. It has been used in Ayurveda, Unani, and Siddha system of medicine for treating diseases of hepatobiliary (the liver, and bile), and renal system, like washing kidney-bladder, the liver diseases, jaundice, hepatitis, etc.

In India, Chicory is commonly known as Kasni. It is not mentioned in classical Ayurvedic texts.

In Unani Tibbi, it is known as Hindba, and Kasni, and used to prepared Sharbat-e-Kasni, and Arq Kasni. It is given to treat fluid accumulation in the body, jaundice, hepatitis, fever, and kidney disorders. In jaundice, Unani preparation, Sharbat-e-Kasni is taken in a dose of 25ml with water twice daily.

The Chicory plant is native to the temperate parts of the World, and is cultivated in many countries. It is an erect woody perennial herb, around 1 m in height with a fleshy taproot of up to 75 cm in length, and large basal leaves, and smaller upper leaves. It can bear extreme temperatures during both vegetative, and reproductive growth stage. It has azure blue flowers. Its roots resemble those of dandelions. The Chicory root stump are dug before the flowering.

The tap roots are the most commonly used part of the plant. The root is fleshy, and tapering, wrinkled longitudinally, and brown on the outside. The root has bitter, and mucilaginous taste.

The botanical name of Chicory/ Kasni is Cichorium intybus. It belongs to plant family Asteraceae. Below is given taxonomical classification of the plant.

Geographical distribution- The plant is native to the temperate parts of the World, and is found wild in Punjab, and Andhra Pradesh regions. It is also cultivated in Bihar, Maharashtra, Gujarat, Tamil Nadu, Himachal Pradesh, Orissa, and Kerala.

In India, its seeds are sown in October-November in plains, and during March-April in hills.

Varieties- There are two varieties of the plant, a cultivated sweet variety, and the wild bitter variety.

The dried fruit, and seed is yellowish brown in color, and 1-3 mm in length, and 1-2 mm in breath, and 1mm in thickness triangle shaped, and has characteristic odour.

Ayurvedic Properties, and Action of Chicory

Rasa (taste on the tongue)-

Both the varieties bear broad leaves near stem, and thin leaves above. Cultivated variety is relatively more cold, and moist.

According to Unani System of Medicine it removes the visceral, hepatic, and vascular obstruction. It is a good but not very strong astringent. It is used as plaster in case of gout.

The latex of the wild variety removes opacity of the cornea. Purging cassia is dissolved in its juice, and used as gargle in pharyngitis. It relieves nausea, and counteracts the ill effects of excessive yellow bile, it strengthens the heart.

The wild endive is better than the cultivated variety for stomach diseases, endive is said to be suitable for all kinds of temperaments of the liver, the drug is particularly suitable for hot tempered the livers, and however it is not harmful to cold tempered organs unlike some cold vegetables.

Kasni is used as saag (vegetable), and juice of whole plant extract, and sheera of its seeds useful in kidney’s hot temperament.

Leaves of the plant contain salts such as sulphates, and phosphates of sodium, magnesium, and potassium as well as potassium nitrate. It also contains a bitter glycoside named cichorine.

The Dosage of Kasni herb

Use of Chicory/ Kasni

Extraction of Inulin- The roots are used to extract inulin. Inulin belongs to a category of carbohydrates known as fructans, and composed of a series of oligo-, and polysaccharides of fructose. It is starch but has less caloric value. It is source of dietary fiber.

Some of the benefits of inulin include modulation of microbial fermentation, reducing fat, and cholesterol absorption, lowering LDL, and increasing HDL. It is a prebiotic.

Inulin is indigestible in the gastrointestinal tract, and but fermented by the colonic microflora. Thus it increase fecal biomass, and water content of the stools. It improves bowel habits, and gives relief in constipation.

As vegetable– The leaves of Chicory plant is used fresh or cooked.

The leaves of young plants are used as pot-herbs, and cooked like spinach. Leaves of older plants, when blanched, were used like celery. It is eaten as a green for salads.

Medicinal Uses- The plant is used medicinally to treat variety of ailments for centuries around the world.

Medicinal Use of Chicory

Liver Tonic, Diseases of the liver

The decoction of seeds are used to induce period.

The tea prepared from the roots gives relief in bloating, abdominal fullness, flatulence, and slow digestion.

Pain in the body, joints, constipation

This simple tea shows beneficial effects in pain in the body-joint, gout, rheumatism, and constipation. This preparation can also be given to children to treat constipation in a dose of half cup.

The paste of leaves is applied externally for painful joints, and on insect bites.

The roots boiled, and mixed with sirka/ vinegar used as gargle helps in tooth sensitivity.