Rauwolfia serpentina is known as Sarpagandha in Hindi.  It belongs to the family Apocynaceae and is found in sub-Himalayan ranges and Western Ghats of India. Rauvolfia serpentina is used in Homeopathy and Ayurveda for the management of hypertension due to its hypotensive and neuro-depressive activities. 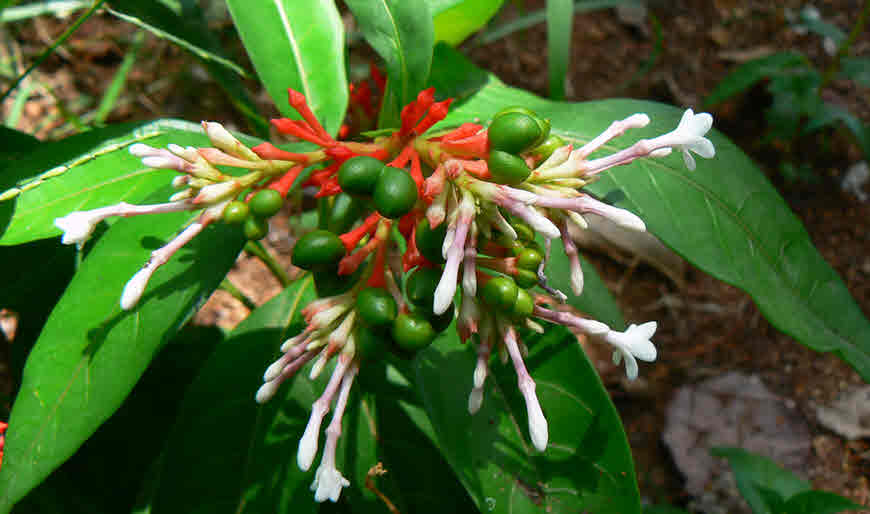 Rauwolfia serpentina is an erect herb or undershrub which is 15-75 cm high. Its roots are tuberous, irregularly nodular with pale brown bark. Its leaves are in whorls of three. Its flowers are 1.5 cm long, white or pink in color. It is a perennial undershrub widely distributed in India. It is found in sub-Himalayan tracts up to 1,000 m as well as the lower ranges of the Eastern and Western Ghats and the Andaman. It is a good source of minerals such as Calcium, phosphorus, Potassium, Sodium, Magnesium, Iron, Zinc.

Its root and bark extract is used to enhance performance.  Native Indian medicine used the roots of Rauwolfia to cure various central nervous disturbances like anxiety, excitement, psychosis, and epilepsy.

It is a species of flower. It is native to the Indian subcontinent and East Asia.

Habitat: It grows well in a hot humid climate, with a temperature between 10-38 degrees Celsius. It needs partial shade tropical or subtropical belt. It grows in a rainfall ranging from 250-500 cm. It prefers sandy alluvial loam to red lateritic lam or stiff dark loam.

Rauwolfia serpentina root is bitter and acrid and uses as a laxative, diuretic, antidote to snake venom, expectorant, and febrifuge. In folk and tribal medicine, the root of this plant is used during delivery to stimulate uterine contractions and promote the expulsion of the fetus. Crying babies are put to sleep by working mothers by making them suck the breasts, which are smeared with the root-paste. Its roots contain risperidone which is useful in insomnia. The root extracts are used for treating intestinal disorders, particularly diarrhea and dysentery, and also used as anthelmintic.

Extract of this plant is used since ancient times. Alexander the Great used this plant to cure his general Ptolemy I Soter of a poisoned arrow. Mahatma Gandhi took it as a tranquilizer during his lifetime. A chemical constituent in this plant mainly risperidone is used by pharmaceutical companies from 1954 to 1957 to treat high blood pressure and for mental disorders including schizophrenia. It was also used in traditional Chinese medicine. The Chinese name of this medicine was shégēn mù or yìndù shémù. The wood which is known as serpentwood is used by woodcarving and woodturning hobbyists.

Rauwolfia was first mentioned in literature in 1940 for its value in hypertension. Two years later, Bhatia reported that Rauwolfia is a well-tolerated and useful medicine for treating high blood pressure. Wilkins and Judson have administered Rauwolifa to over 100 patients for periods of a month to a year. Resperine removes the store of noradrenaline from artery walls. This helps blood vessels to relax so that blood can flow more easily. It also slows the heart rate.

In clinical research, it was found that depression is due to the insufficient activity of monoamine in the brain. It was previously believed that Rauwolfia causes depression as it consists of risperidone. But it, later on, proved wrong. It was rather observed that risperidone has a calming effect. It is now used as an antidepressant.  Davies and Shepherd were the first to report that reserpine is an effective antidepressant in a randomized placebo-controlled trial.

As it contains yohimbine, it is used in sports supplements. Yohimbine is an antagonist to the alpha-2 adrenergic receptor. Alpha-blockers work by keeping the hormone norepinephrine (noradrenaline) from tightening the muscles which cause the vessels to remain relaxed and improves blood flow and lowers blood pressure. Yohimbine has the property to lower and increase systemic blood pressure depending on the dosage. It is also used in weight loss supplements.

Another constituent that is extracted from the bark of the Pausinystalia Yohimbe tree and from the Rauwolfia root is indole alkaloid rauwolscine. It is also a selective antagonist of alpha-2 adrenergic receptors. Decreased alpha 2-adrenoceptor sensitivity may promote the breakdown of stored triglycerides in adipose tissue. Rauwolscine and yohimbine are also partial agonists for the human 5-HT1A receptor. They may induce a serotonin-like effect. It helps to elevate one’s mood. Rauwolscine is also anesthetic and may even possess aphrodisiac effects.

It also helps to lower the blood glucose level in some animals. It helps to improve carbohydrate and lipid balance in the body.

It is a small shrub that is native to India to Sumatra. In 1952 risperidone was isolated from its root and has since been used by western medicine as valuable drugs for the treatment of high blood pressure.

It is to appear in Sanskrit as an Ayurvedic medicine named Sarpagandha and Chandra. Chandra means moon and refers to the use of plants in the “moon diseases” or lunacy.  Sarpagandha, snake’s smell or repellent, refers to the use as an antidote for snake-bite. Rbeede in 1686 probably mentioned this species, at least in part, under the name Tsjovanna (or Sjouanna) Amel-Podi; he noted the use of the root against snake-bite and the sting of scorpions. Kaempfer in 1712 described the plant and its curative properties under the name Radix Mungo. Burman in 1737applied the term Lignum ‘Colubrinum to it. Linnaeus in Materia Medica, 1749, used the pharmacopoeic appellation Serpentini Lignum. Rumphius named the plant Radix Mustelae, in reference to the legend that the mongoose has recourse to it when bitten by a poisonous snake; he stated that the species came to his notice in 1693. febrifuge, tonic, stomachic, sedative, soporific, eclampsia relief, cough-sedative, diuretic, purgative, and anthelmintic. Trimen noted its use against hydrophobia. Dymock (1879) stated that in Bombay most of the laborers who came from southern Koncan kept a small supply of the root which they valued as a remedy in dysentery and other painful affections of the intestines. Roxburgh reported that it was administered to promote delivery in child-birth. Wight added that it was supposed to act on the uterine system somewhat in the manner of Ergot. Khory stated the root was said to cause abortion if given to pregnant women.  Rama Rao described the “whole-plant dried in shade, powdered and given in honey as a remedy in rheumatism, all poisons, insanity, epilepsy, fits, and eczema. The juice of the fresh leaves has been mentioned for the treatment of corneal opacities” (Kapur). Dalzell and Gibson reported the plant used “to poison tigers “.

It is suited to a person who has difficulty concentrating and confused. He wants to be alone. He is worse by mental exertion. He has fear of evil. He has memory weakness and restlessness at night in bed. He is unfriendly.

Take 5 to 10 drops of tincture twice daily in the beginning and then take 1x, 2 drops daily for 15 days.

Reduce the dose as symptoms improve. If complaints are not relieved, consult a specialist.