Homeopathic medicines can be safely used to treat teething problems such as delayed teething, painful, and difficult teething. The small pills can be dissolved in one spoon of water and can be given to babies.
Anupama December 26, 2020 December 26, 2020

Teething is the process of eruption of teeth from the gums and generally start at the age of 5 to 7 month in infants. The primary teeth are formed during the pregnancy and all of them appear by the age of three. 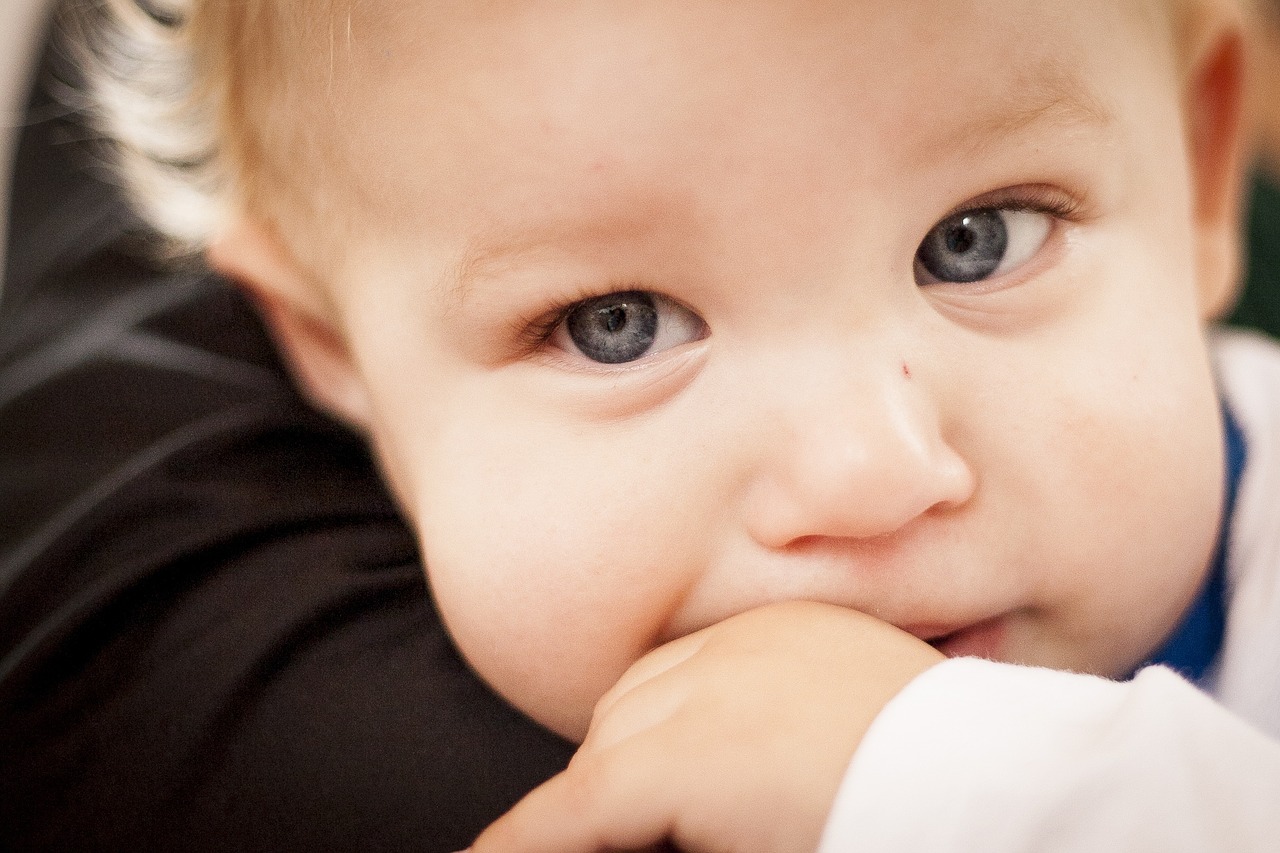 There can be many issues related to teething which bother parents such as delayed, difficult, or painful teething. During teething few babies become irritable, restless, and cry too much. They can be drooling, mild fever, and lose motions.

In Homeopathy, there are many medicines that can be safely given to babies for treating the common problems related to teething.

Teething usually begins at the age of 6 months but can start anytime between 3: 12 months. First of all lower front teeth come up first followed by upper front teeth 1 to 2 months after. The complete set of 20 primary teeth is usually erupted by the child’s third birthday.

The eruption of primary teeth usually begins between age six and ten months, the front incisors are most commonly the first teeth to erupt, followed by the first primary molar, canines, and second primary molars.

Tooth eruption is usually bilaterally symmetrical means left and right teeth appear at similar times. All primary teeth have usually erupted by age 30 months, although this can depend on gender (girls tend to develop teeth earlier than boys)

Permanent teeth develop behind the primary teeth. As the permanent tooth grows towards the surface, it takes the place of temporary teeth.

Permanent teeth usually start to emerge at around six years of age. Occasionally the primary tooth remains beside the permanent tooth, but in most cases, it will drop out, without treatment, within one year.

There are a few symptoms that are associated with teething. Some of them are given below:

Always examine the teeth of your child by looking in the child’s mouth as soon as the first tooth erupts. Examine the teeth, tongue, and oral cavity, gingiva for abnormalities.

Abnormalities are as follows:

Common problems that are seen in children during dentition

1. Decay: Tooth decay may occur due to many factors like acidogenic bacteria, saliva, dietary factors, and as a result of fluoride. A major factor in young children is the frequent consumption of sugary foods. Extra care should be taken by parents regarding dietary habits, teeth cleaning, plaque removal, and fluoride toothpaste.

2. Gingivitis: This is very common in children. It is a reversible inflammation of the gingiva caused by dental plaque build: up due to poor oral hygiene. It is seen as a result of malnutrition and viral infections. If untreated it results in the destruction of the supporting tissues surrounding the tooth. This condition is medically known as periodontitis.

3. Oral Thrush: It is commonly seen in infants and young children because their immune system is immature. It is seen in both infants and children. In infants, it occurs after exposure to the microorganisms of the vaginal tract during delivery. In children, it occurs after the use of antibiotics.

It is characterized by white plaques on the buccal mucosa and tongue. If these plaques are wiped off, it leaves a red, raw painful surface.

4. Angular cheilitis: It is a condition that occurs in one or both corners of the mouths. Symptoms include redness, painful cracking, scaling, bleeding, and ulceration. It is also associated with drooling in children, licking the lips, and sucking the thumb.

5. Gum boil: It is soft, reddish swelling that occurs at the site of drainage of a primary tooth abscess.

6. Ulcers: These are commonly seen as a result of trauma. This may also be caused by thumb sucking, scratching, lip biting, foods, and drinks which are too hot, as a result of chemical in toothpaste, mouthwash. This can be seen on the edges of the tongue, lips, and buccal mucosa. These generally heal within two weeks. Another type of ulcer is aphthous or “canker sores” which is a form of recurrent ulcer that is more common in older children and adults. They are painful, shallow, round, or oval ulcers with a greyish base. This persists for longer than a traumatic ulcer.

7. Teeth grinding: It usually occurs during sleep. It is generally seen at 7 – 10 years of age and rarely seen in adolescence.

It does not need any medical supervision.

Homeopathic medicines can be safely used to treat teething problems such as delayed teething, painful, and difficult teething. The small pills can be dissolved in one spoon of water and can be given to babies.

These medicines are also given to adults and therefore the general appearance of patients and the condition in which symptoms are improved or worsen are also given.

Calcarea carbonica is a Homeopathic remedy with chief action on glands, skin, and bones. The patient has increased local and general perspiration, and swelling of glands. It raises blood coagulability. It is adapted for patients who take cold easily with increased mucoid secretions.

Calcarea carbonica is best suited for children who grow fat, are large bellied with a large head, pale skin, chalky look. These children are sensitive to cold. They like eggs, dirt, and other indigestible things which often causes diarrhea.

These patients are fat, fair, flabby, always perspiring sweat which is cold, damp, and sour. Mentally these patients are very apprehensive, which is worse towards evening, Fears loss of reason, misfortune, and any contagious diseases.

The patient is forgetful, confused, low-spirited. He/she is averse to doing any work or exertion. There is a sour taste in the mouth. There is dryness of the tongue at night. There is bleeding from the gums.

Calcarea carbonica is prescribed for babies with difficult and delayed teething. The infant may also show delayed walking or taking. He or she may have a large head or abdomen and more fat on the body. The child is chubby, sweaty, constipated, and has poor immunity. There is the coldness of hands and feet. The head, hand, and feet of the child perspire during sleep.

It is also given to treat Toothache which excited by a current of air, anything cold or hot.

Dosage: Should not be repeated too frequently in elderly people. Three doses of Calcarea Carb 30c

3 times a day till improvement.

It is especially indicated in tardy dentition and in problems incident to that period, bone diseases, non-union off fractured bones, and anemia after acute diseases and chronic wasting diseases.

All its symptoms are worse from any change of weather. There is numbness and crawling is a characteristic sensation.

Calcarea phosphoricum is given to babies with slow and difficult dentition. It covers all complaints during dentition, where teeth develop slowly. The baby is irritable and whiny. It is suited for a baby who is thin and pale.

There is a rapid decay of teeth.

Dosage: Calcarea Phos 6x is generally given thrice a day till improvement.

Kreosotum is a mixture of phenols obtained from distillation. It is related to pulsations all over the body and profuse bleeding from small wounds. It has pain which is increase by rest.

It has discharges that are burning very offensive discharges. There is rapid decomposition of fluids and secretions.

It is a very good remedy for ailments in teething children. The child who has a very painful dentition from cold will not sleep. There is the very rapid decay of teeth with spongy, bleeding gums. Teeth dark and break very easily. There are a putrid odor and a bitter taste in the mouth.

Dosage: 200c, once a day usually recommended until improvement.

It is a very good remedy for diseases of bones, caries, and its destruction. This is deep and slow in action. It is suited for children, with a large head, with a distended abdomen, slow walking, have bad effects of vaccination. The patient has a lack of vital heat. There is great sensitiveness to taking cold. There is intolerance to alcoholic stimulants. Gums sensitive to cold air. There are boils on gums. It is a remedy for pyorrhoea. Teeth are sensitive to cold water.

Dosage: It should be given in 30th potency 2 times a day till improvement.

It is pre-eminently a female remedy, especially for a mild, gentle, yielding disposition. The patient is sad, cries easily, weeps when talking, and has a changeable mood. Though the patient is sensitive to cold air she craves it. The patient is thirsty less. Symptoms always changing. The patient has a dry mouth, without thirst, wants it washed frequently. There is the yellow or white coated tongue, covered with thick mucus. Pain in teeth is better by holding cold water in the mouth. There is a bad smell from the mouth.

Dosage: it should be taken in 200 potencies 2 times a day till improvement.

This medicine is prescribed for Painful Teething in which the gums are red, swollen. One cheek appears red and hot whereas the other is cool and pale. The baby is fussy and irritable due to teething trouble. Teething may be accompanied by diarrhea or infection of the ears.

Dosage: It should be given in 30th potency 2 times a day till improvement.