Dark circles under the eyes can be defined as bilateral, round, homogeneous pigment macules on the infraorbital regions. Medically it is known as Periorbital hyperchromic macules and patches and in common language as Panda eyes. 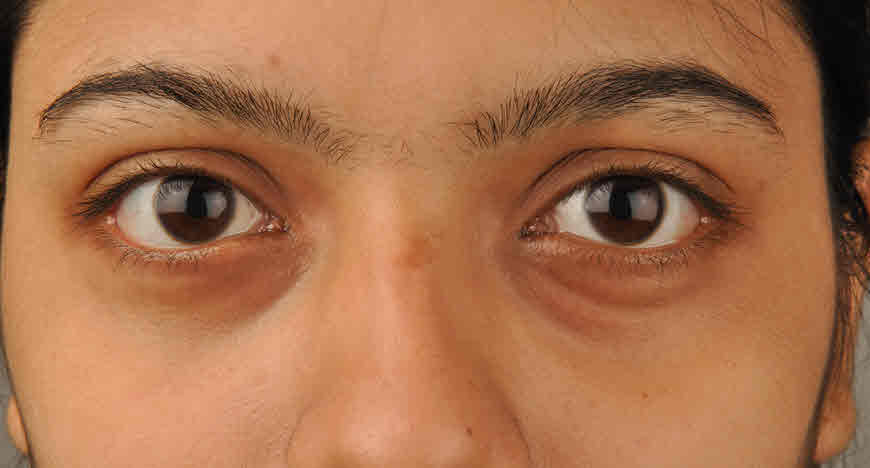 Dark circles under the eyes are round pigmentation which is found in both eyes. It can be caused due to various reasons including dermal melanin deposition, post-inflammatory hyperpigmentation secondary to atopic or allergic contact dermatitis, periorbital edema, superficial location of the vasculature, and shadowing due to skin laxity.

Dark circles are a major concern for many people. It is an unpleasant condition. As there is more demand to look fresh, physically, and intellectually active, dark circles are a matter of concern. It affects individuals of any age. It is equally seen in both genders and in all races.

As age advances, dark circles are further worsened with loss of elasticity of skin under the eyes which results in skin sagging and abnormal deposition of lipid under the eyes. It affects the social life of an individual, as it changes face appearance. A person looks tired, sad, or gives a hangover look. It is seen that some people hide dark circles to show their positivity.

Dark circles can often be seen in more than one member of the family. It is seen more commonly in individuals who have dark skin, hair, and eyes. It is often seen after the age of 20.

Dark Circles can be a result of a variety of factors including deep facial anatomy, soft tissue changes, as well as contributions from the skin. Various anatomic factors contributing to dark circles include the facial ligamentous architecture, the bony structure, midface soft tissue including the prominence of the orbicularis oculi muscle and vasculature, and thin eyelid skin with minimal to no subcutaneous tissue. Skin aging and environmental-related changes throughout are also responsible factors.

This is caused by the thickening of the dermis which may be due to edema under the eyes. This swelling can cause light reflection which gives the appearance of increased darkness of the skin.

It is seen that allergic people are often affected by dark circles. These individuals have a tendency of rubbing and scratching the skin around the eyes. Allergy to the face can also cause the accumulation of fluid under the eyes. Patients with allergies frequently rub their eyes.

Dermal melanocytosis and post-inflammatory hyperpigmentation conditions usually appear as curved bands of brownish skin around the eyes. This is seen worse if the patient has to bulge lower eyelids. Bulging lower eyelids causes a shadow effect which results in the worsening of dark circles.

Environmental factors also cause dark circles around the eyes. This includes sun exposure and intake of drugs.

As eyelids have sponge-like properties it causes accumulation of fluid. It is observed that fluid accumulation gets worse in the morning or after taking salty food. An important feature of this type of dark circle is that patient says that there is a change of intensity of the dark circle from day tonight.

It is seen that with age there is the loss of fat around the eyes, so the skin becomes thin and skin atrophy results. It leads to the visibility of blood vessels around the eyes.

Some individuals have a tear through depression which is centered over the midsection of their face. This depression deepens with age as fat under the eyes is displaced forward which creates shadowing below the eyes. This worsens with the aging of the eyelid and midface because of loss of fat and thinning of the skin over the orbits in addition to the loss of fat in cheeks which produces hollowness around the eyes. Persons with deep-set eyes seen with clear darkening because of shadowing. As light comes from above and is shielded by the upper brow, it casts a shadow on the lower lid giving the appearance of darkness.

Lack of sleep is a common cause of dark circles. This is seen in children of school-going age. In this case, if a person gets adequate sleep then the dark circle improves.

Sometimes the presence of extra pigment around the eyes can cause dark circles. This is a normal condition and is not related to any disease condition.  The use of skin lightening creams and retinol creams is often used as a treatment.

Sun exposure often results in fine wrinkles which cause a skin darkening effect. For this eye, moisturizing creams are often used. It should be kept in mind that this cream should never be applied to the eyes as it may cause irritation and sometimes damage to the cornea. The cream should be applied just below the lower eyelashes. Creams should be applied gently with the ring finger or little finger, as these fingers have the least amount of force.

Other Factors Responsible for Dark Circles

How to Reduce Dark Circles

In order to get puffiness of eyes, some gels are available which has soothing effects to give a cooling effect to the area which reduce puffiness.

Almond Oil (Roghan Badam Shirin) can be applied under the eyes for improving skin condition.

Chilled cucumber slices are often used on the closed eyelids for 15 minutes.

Cold tea bags can be put on closed lids for 10 minutes.

Eye patches which are known as eye sheets are applied to the area for decreasing puffiness.

Individuals often use concealer to hide dark rings. It must be kept in mind that concealer should be lighter than normal skin tone to the under-eye area.

Chemical peeling can be helpful. It involves the application of chemical agents that causes controlled destruction of the skin around the area. This helps in the removal of lesions.

Surgery for dark circles is often recommended in some individuals.

It is often seen in individuals that dietary supplements like Vitamin C and E, chamomile, and zinc results in the disappearance of dark circles. Also, intake of white tea, grape seed, and tomato can reduce dark circles.

Vitamin K along with retinol is available for the treatment of dark rings.