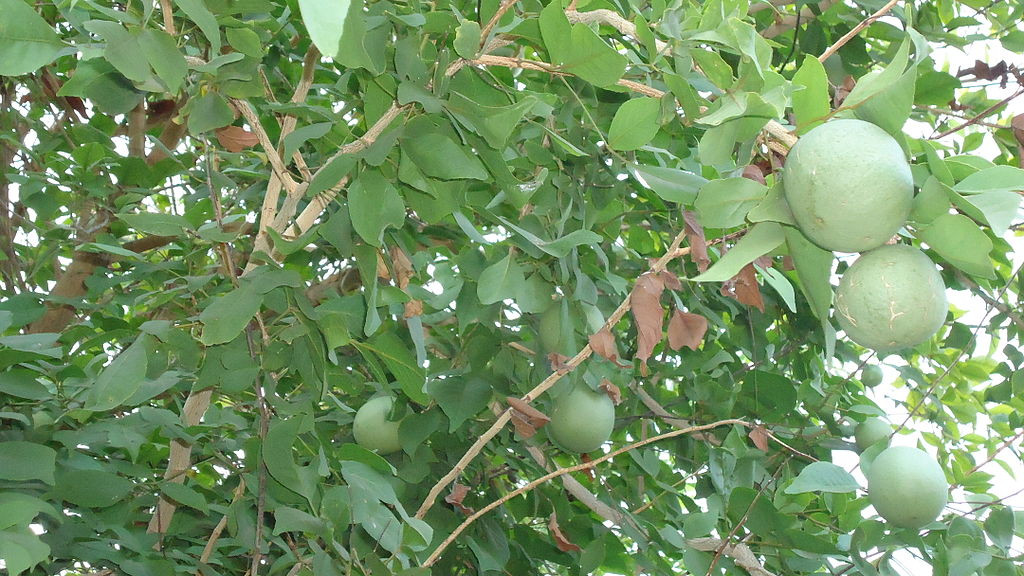 This sacred medicinal tree has great nutritional, environmental as well as commercial importance. It has tremendous therapeutic potential.

The fruits, commonly known as Bael are available during the summer season. They have a hard green outer covering and yellow pulp with seeds. The ripe fruits are eaten fresh and also used to make Sharbat.

In Ayurveda, the dried pulp of the unripe Bael fruit is given along with other ingredients for dysentery, piles, dyspepsia, jaundice, scrofula, indigestion, and chronic fever. The leaves are indicated in jaundice and anasarca. The leaf decoction is given in case of asthmatic complaints.

Aegle folia are found to be effective in gastrointestinal affections such as dysentery, colic pain, constipation, indigestion, sour eructation, piles.

Bael tree has its origin from the Eastern Ghats and Central India. It is indigenous to the Indian subcontinent and mainly found in tropical and subtropical regions. The tree is found as a wild tree, in lower ranges of the Himalayas up to an elevation of 500 meters. It is found in areas like the Himalayas, Uttar Pradesh, Bihar, Chhattisgarh, Uttaranchal, Jharkhand, Madhya Pradesh, the Deccan Plateau, and along the East Coast. It is also grown in some Egyptian gardens in Surinam and Trinidad.

It is a slow-growing sharp tree and medium in size, about 12 to meter in height with short trunk, thick, soft, flaking, bark, and the lower ones drooping. The tree has straight sharp axillaries thorns, 2.5 cm long.

Flower greenish, white, sweet-scented about 2.5 cm across, new leaves is glossy and pinkish-maroon in color. A mature leaf emits a disagreeable dour when brushed. The fruits are round, oval, may have a thin, hard, woody shell.

Bael is known in India from pre-historic times and has been mentioned in the ancient system of medicine. It has a great mythological significance also. Every part of plants such as fruit, seed, bark, leaf, and root are important for the preparation of various traditional formulations. Bael plant acts as a sink for chemical pollutants as it absorbs poisonous gases from the atmosphere and makes them inert. It is also known as “climate Purifiers”. As it emits a great percentage of oxygen in sunlight as compared to other plants.

Mentally patient commits mistakes in spelling. Headache inpatient appears between 4-8 p.m. He experiences heat in the vertex in the evening which is better by eating.

There is swelling in the upper eyelids. There heat from the face, eyes, and ears disappears after eating.

The patient feels distended abdomen especially the lower abdomen, flatus expelled with a loud noise especially in the afternoon. This remedy is very useful in indigestion, colic, piles, and constipation. It is a very remedy for amoebic and bacillary dysentery.

This medicine is used in form of tinctures, 3x, 6, 30 potencies. 5 drops of mother tincture should be used two times a day.