Azadirachta indica is known by many names such as Neem, Margosa tree, Nimba, Vembaka, Bal-nimb, Vembu, Vepa, and Azadirachta. It is a miraculous tree native to India. Every part of this great tree is useful. The leaves, bark, seeds, oil, and roots all are used for some therapeutic purpose. It is used as folk medicine since time immemorial. Read more about Neem usage in the Ayurvedic medicine system. 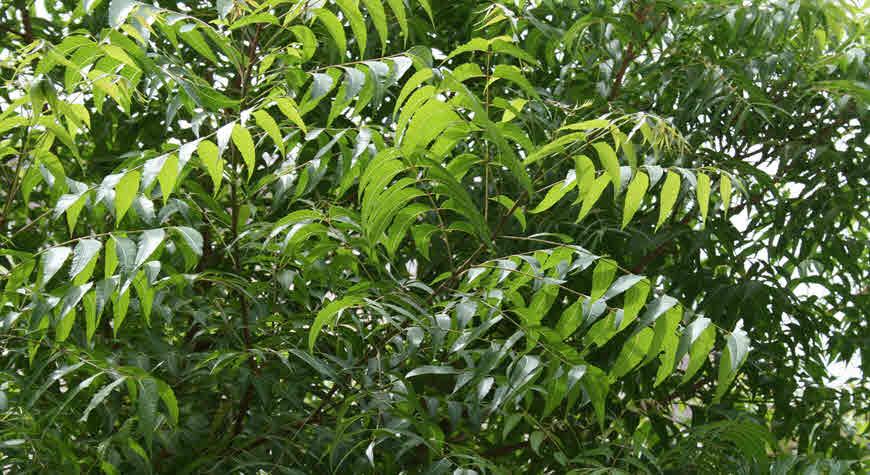 Neem is used in Homeopathy, Ayurveda, Siddha, and Unani system of medicine due to its immense health benefiting qualities. It is a boon for the skin when used both internally and externally. It detoxifies the blood and cures acne, pimples, boils, and similar condition. When the tender twig of Neem is chewed as Datun daily, the teeth are protected and gums are strengthened.

Neem is bitter in taste. But this bitterness is responsible for its therapeutic efficacy of this tree. Nimbin, nimbinene, 6-desacetylnimbinene, nimbandiol, nimbolide, and quercetin are present in the leaves. Leaves are also reported to contain β-sitosterol, n-hexacosanol, and nonacosane.

Neem is a tonic and a revitalizer, it works effectively in the treatment of diabetes. It has been found to reduce insulin requirements by up to 50% for diabetes, without altering blood glucose level. It significantly reduces insulin requirements for insulin-dependent diabetes and has also been scientifically proved to be effective in treating and preventing diabetes. The possible mechanism of the anti-hyperglycemic effect of Neem leaf was found to be a reduction in peripheral utilization of glucose and suppression of glycogenolytic effect due to epinephrine action.

The bark is also known as Margosa Bark. It contains Azadirin, Margosin, and Catechin.  The bark is indicated in conditions like ozena, pemphigus, scabies, leprosy, helminthiasis, gonorrhea, glossitis, ophthalmia, asthma, cough, catarrh, constipation, uterine weakness. It is a very good remedy for malaria.

When a patient has giddiness especially at 10. am. This feeling is worse when rising from a sitting posture. It is also given for throbbing headache, which is on the right side. This kind of headache is worse by stooping. The patient’s head is very painful and very sensitive to touch.

It is given for the condition like ophthalmia in which eyes are red, congested. There is burning in the eyes along with heaviness in the eyes, especially on the right side.

It is a very good remedy for left-sided sore throat. There is a putrid taste in the mouth, with no thirst but the mouth is bitter. The tongue is painful with a burning sensation. The saliva of the patient tastes salty. It is also given in difficulty in swallowing especially when swallowing water and meat. The patient is very thirsty, especially at long intervals or sometimes thirstless. The patient likes cold water.

It is given for heartburn with a good appetite.  It is a very good remedy when a patient has a feeling of heaviness in the abdomen with uneasiness, flatulence. The patient passes very offensive flatus. There is twisting pain so that he must bend forward which relieves. There is an insufficient stool that is small, hard, and knotty. So, it is a very good remedy for constipation.

The patient has scanty, white, clear urine, with a strong smell.

It is given in cases of asthma when a patient has a very troublesome cough after bathing at 1.p.m. He has thick, white discharge in small lumps, which is expelled with much difficulty. The patient has very difficult respiration. The patient has pain in the lower part of the right side of the chest.

In this remedy numbness of the right hand. The patient has a sensation of paralysis. Burning of soles and hands is also corrected by this remedy.

It is given in cases of chronic fever where fever is observed from 4:30 p.m with chill or without chills and diminishes at 7:30. The patient in the heat stage feels glowing heat with burning in various parts of the body, even in the open air. There is copious sweat, especially on the forehead, neck, upper part of the body. There is no sweat on the lower parts of the body.

Mother Tincture: Give one drop of the drug in 3x dilutions, 4 times a day For 5 days.

Pellets: 1-2 tablets twice daily. Children should be given one tablet twice daily and when symptoms improve 1 tablet a day. If complaints are not relieved, consult a specialist.

Side Effects of Azadirachta Indica