Spinach is a leafy green vegetable. It came originally from south-western Asia. It is now grown in most parts of the world. 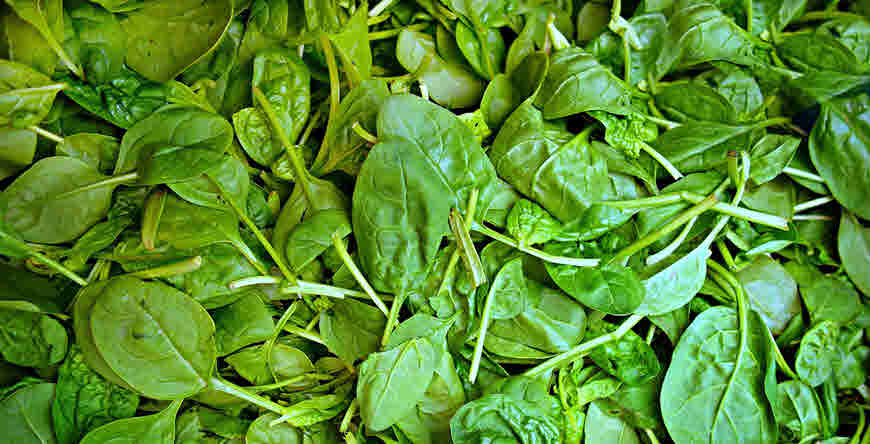 Spinach is a rich source of vitamins such as Vitamin C, A, and vitamin E. It also contains minerals like magnesium, manganese, iron, calcium, and folic acid. It is a good source of chlorophyll. This chlorophyll helps indigestion. It also contains carotenoids like beta-carotene and lutein. It is a good source of the bioflavonoid quercetin with many other flavonoids which exhibits antioxidant, antiproliferative, anti-inflammatory antihistaminic, CNS depressant.

It also used to prevent bone loss, which commonly osteoporosis. It has anti-inflammatory properties that cure the pain of arthritis. It is very good for the heart and circulatory system as it has energy-boosting properties.

Spinach is an annual plant and it is native to central and southwestern Asia. It is commonly eaten in the winter season by Indians.

The name spinach came from the Persian word Ispania which means green hand. It later became spanachia (Latin). Now it is known as spinach. In ancient times it is known as the prince of vegetables. This vegetable introduced in China as a gift from the King of Nepal. It comes originally from northern Asia and is mentioned numerous times in the Holy Bible. During the 16th, it was introduced into central Europe.

It is a leafy vegetable with broad, crisp, dark green leaves. It is a quick maturing, cold season annual crop. It has a stem that is erect from 30-60cm high, round, smooth, piped, succulent. It is sometimes reddish in color.

It has alternative leaves, the lower ones very long-petioled, variously lobed with lobes of an acute triangular shape, smooth on both the side.

Male flowers have long terminal glomerate spikes and on shorter ones from the axial, very numerous, sessile, calyx 4-parted, stamen 4, anthers twin and are very large.

Females flowers are axillary, sessile, crowded, Calyx 2-tipped with a projection horn in each side, growing into spines when the seed is ripe.

The bottom of the leaf is shiny, with thick veins running across it.

Its flowering time- is late spring to early autumn.

Spinach is a very nutritious leafy vegetable. It offers numerous health benefits. In ancient times, the plant was used in diseases of blood and brain, asthma, leprosy, bilious disease, urine stones. It is also useful in controlling diabetes. The leaves of this plant have cooling effects and help in controlling fever.

It acts as a diuretic and laxative. It is useful in the treatment of ringworm, scabies, leucoderma (white patches on the skin.) burning in urine, flatulence, vomiting, inflammation of the lungs and the bowels, sore throat, pain in joints, thirst, lumbago, cold, and sneezing, sore eye and worm diseases.

As we know from our school times, spinach rich in fiber which adds bulk to the stool to relieve constipation. When fiber is consumed it can be fermented by the colonic microorganism to various gases like hydrogen and carbon dioxide. It may also pass through the large intestine and bind water hence helps increasing stool weight.

As it contains a rich amount of chlorophyll it is effective in treatment for a various disease like blood pressure, obesity, diabetes, gastritis, ulcers, disease related to the pancreas and liver, osteomyelitis, asthma, eczema, hemorrhoids, skin problems, fatigue, anemia, bad smell from the mouth, correction body odor and constipation.

It is very useful in the treatment of constipation as Spinach juice cleanse the digestive tract by removing the accumulated waste products. It tones up the bowel movement. It is said that if any person has a stubborn case of constipation, he must consume raw spinach juice, about one pint a day. It will cure his constipation.

It helps in quickening the passage of stool.

It is rich in Vitamin A. Vitamin A promotes the growth and health of rods and cones found in the eyes. So it is beneficial in the treatment of night blindness.

Spinach is a rich source of calcium and other alkaline elements. It helps in keeping the tissues clean. It helps in preventing those chronic diseases which are due to the formation of too much acid in the system. It helps in reducing gastric acidity.

Spinach is also considered a liver tonic. It helps in the treatment of jaundice, general edema of the body. It helps in toning of the liver, gall bladder, blood, and lymph circulation.

It helps in lowering the body’s cholesterol level. It decreases the cases of cardiovascular disease. As spinach contains fiber, it absorbs and binds the cholesterol, hence prevents it from dissolving in the bile acids.

It helps in preventing cancer, as it is a rich source of antioxidants and anti-cancer compounds.

It helps in reducing type 2 diabetes as it has high magnesium content.

As it is a rich source of folic acid. It prevents megaloblastic anemia in pregnancy. It is also a good source of nutrition for nursing or lactating mothers and improves the quality of milk.

Leaves of spinach can be used as diuretic food (it increase the secretion and discharge of urine). It can be useful in the treatment of cystitis, nephritis, and scanty urination due to dehydration.

Spinach helps in reducing age-related eye problems. It helps in lowering the risk of cataracts.

Seeds of spinach are useful in in following conditions:

No health hazards or side effects are known in conjunction with the proper administration of designated therapeutic dosages.

Due to relatively high nitrate content, it is advisable to do not eat consuming spinach too often.

Spinach should not be left at room temperature for a long duration to avoid nitrite formation.

Green leafy vegetables such as spinach (including parsley, green tea leaves, broccoli, and cabbage) are well known to contain high levels of vitamin K. It may reduce the effectiveness of anticoagulants, increasing the risk of clotting. Intake of such foods should be limited, and the amount consumed daily should remain constant.

The oxalate content of spinach could reduce calcium resorption.