Revand chini, Archu or Indian Rhubarb is a medicinal herb found in Himalaya from Kashmir to Sikkim at high altitude. It is a perennial shrub with rhizomes roots. Indian Rhubarb is known as Amlavetasa in Ayurveda. For the medicinal purpose the roots of the plant are dug up, and dried. 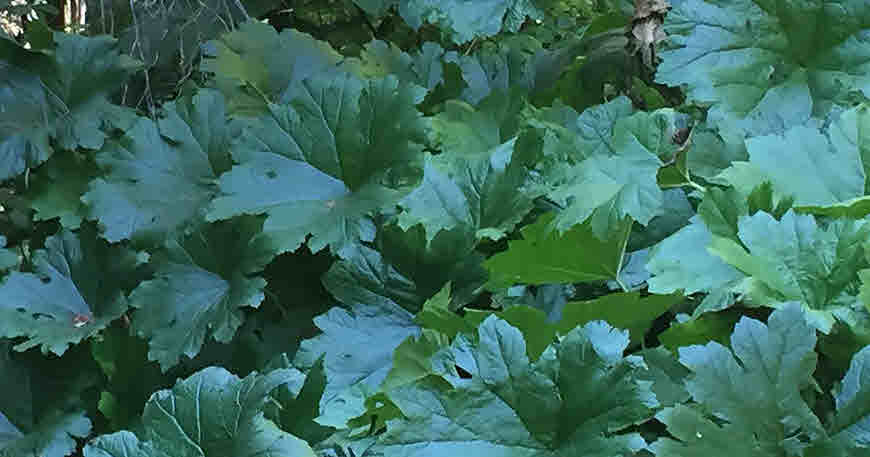 The dried roots are ground to make powder which is used in low doses. Its primary action is of mild purgation. But it has also astringent property, so that its secondary effect is to prevent the bowels.

The roots of the plant are used both internally, and externally. It is bitter, pungent, and reduces Vata – Kapha, but increases pitta. Revand chini works mainly on plasma, blood, and fat. Revand Chini, when chewed produce yellow color, and have gritty-bitter taste. It imparts yellow color to the urine, which is harmless. Externally they are used for cleaning teeth, and sprinkled over ulcers for quick healing. For freckle, and other skin marks, the paste of roots with vinegar is applied topically on the affected parts. In Melasma झाई the root powder is mixed in milk, and applied.

Rheum emodi is a stout herb found in the Himalayan region. It is a leafy perennial herb of 1.5-3.0 m in height. It has large radical leaves. The leaves are edible, and eaten as vegetable. It bears ovoid-oblong, 13 mm long, purple fruits. The roots, and rhizomes are the main parts used as drug, and are collected in October to November.

The botanical name of Indian Rhubarb / Revand chini is Rheum emodi. It belongs to plant family Polygonaceae. Below is given taxonomical classification of the plant.

There are three main types of rhubarbs— Indian or Himalayan, Chinese, and Rhapontic.

Indian Or Himalayan Rhubarb Is Useful In Following Conditions:

Amla-vetasa / Rhubarb is taken in the form of infusion, and powder. The recommended dosage of powder is 0.2–1.0 g powder. 1 gram dose, has laxative effect, and 3 grams has purgative action.

It is sour in taste (Ras), and light, sharp, and drying in action (Guna). Its post-digestive effect (Vipak) is sour. It is an Ushna Virya herb. Ushna Virya or hot potency herb, subdues Kapha (Mucus), and increases Pitta (Bile). It has the property of digestion, vomiting, and purging, and gives a feeling of lightness. It is considered bad for sperms, and fetus.

Amla-vetasa / Rhubarb is rich in medicinal properties. The understanding of these properties will help us to better utilize this herb. These also indicate the conditions in which we should avoid it. For example, it is purgative, and stimulate the evacuation of the bowels. So it should be avoided in chronic diarrhea. Rhubarb contains two different constituents, one from which is a laxative, other constituent is constipative (Astringent).