Commiphora myrrha (bola) is used as folk medicine to treat many diseases. It is also mentioned in Ayurveda. Know complete medicinal properties and uses of this plant.
Anupama December 20, 2016 August 12, 2018

Myrrh which is used for medicinal purpose and commonly known as Bol, Hirabola, heerabol, hirabol myrrh, Abyssinian myrrh, common myrrh, gum myrrh tree, gummi myrrh or Myrrh is the pieces of brownish-yellow sticky mass of the tree Commiphora myrrha. It is the resin that comes out of the secretory tissue in the bark of the Commiphora plant when it is get damaged or incised. This resin is sticky, insoluble in water but dissolves in alcohol. The resin hardens shortly after the secretion and can be liquefied again after heating. 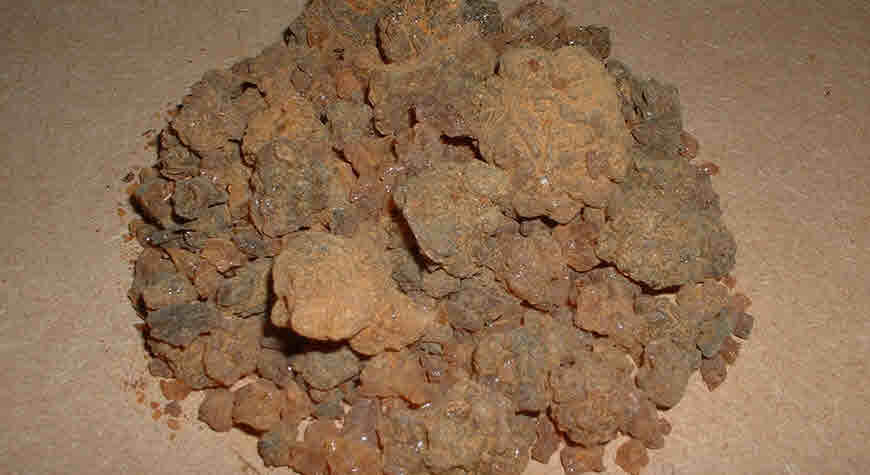 Hirabola is used for medicinal purpose throughout India, Middle East, Tibet, China and. It is native to eastern Mediterranean countries and Somalia and used in African countries from ancient times. In India, it is mainly imported from Persia or Saudi Arabia.

Myrrh is used either alone or with other medicinal herbs both internally and externally. It constricts mucous membrane of mouth and used as a gargle treat oral problems. Myrrh is also used topically in the treatment of skin diseases, infections and wounds due to its antimicrobial action.

Myrrh shows beneficial effects in Fascioliasis (parasitic infection caused by two species of parasitic flatworms or trematodes, typically by Fasciola hepatica, which is also known as “the common the liver fluke” or “the sheep the liver fluke). Fascioliasis is found all over the world and especially in regions where sheep or cattle are reared. The infection reaches to people by eating raw watercress or other water plants contaminated with immature parasite larvae. The immature larval flukes goes through the intestinal wall, the abdominal cavity, and the liver tissue, into the bile ducts, where they develop into mature adult flukes, which produce eggs. Maturing results in the obstruction of bile ducts and causes biliary tract obstruction and the liver damage.

In one small study, seven infected patients were treated with myrrh (1.2 gram/day for 6 days). After treatment, all symptoms and signs were cured and tests shown a dramatic drop in egg count and the eggs were no longer detected 3 weeks after the treatment. Also high-eosinophil counts elevated the liver enzymes and Fasciola antibody titres returned to normal.

Various animal studies, clinical trials and field studies, concludes that myrrh is an excellent fasciolicidal drug free of side effects.

It has aromatic bitter and acrid taste and warm, smoky scent. It turns reddish and dusty upon hardening. The size can vary from small grains up to pieces as large as an egg. It reddish brown with dusty dull surface, moist and unctuous. On breaking resin exhibit a rough or waxy fracture. Fractured translucent surface displays characteristic whitish marks.

It dissolves in alcohol, leaving angular non-crystalline particles of gum and fragments of bark.

How to obtain Myrrh Gum Resin

The botanical name of Myrrh is Commiphora myrrha. It belongs to plant family Burseraceae. There are over 150 species of Commiphora plants. Each species has its unique constituent profile, and hence specific therapeutic actions. The three species which are used medicinally are:

Taxonomical classification of the plant

Myrrh is rich in medicinal properties. The understanding of these properties will help us to better utilize this herb. These also indicate the conditions in which we should avoid it.

This medicinal substance is not originally from India. In Sanskrit, it is called Bol or Vola and this word seems to be derived from Bole (meaning trunk).The ole gum resin is used in Ayurveda for fever, uterine affections and to purify the uterus. Myrrh is hot and dry, astringent and aperient. It reduces cough. Externally it is applied as a stimulant and disinfectant to ulcers, sores, etc.

Bola/Hiraboa is astringent, bitter, and pungent in taste (Rasa), pungent after digestion (Vipaka), and is hot in effect (Virya).

It is an Ushna Virya herb. Ushna Virya or hot potency herb, Kapha (Mucus) and increases Pitta (Bile). It has the property of digestion, vomiting and purging, and gives a feeling of lightness. It is considered bad for sperms and fetus.

Bola is pungent in both the initial and post-digestive tastes (Rasa and Vipaka). It is a Katu Vipak herb. Vipak refers to post-digestive (effect after digestion/cooking of Rasa) effect of tastes after its mixing with digestive juices. It is the long term effect of the herb.

Katu Viapk herbs, increases dryness in the body. Such foods reduce fertility and Kapha. Katu vipaak has catabolic effect on the body.

Myrrh is applied topically on such skin conditions due to its antimicrobial, anti-inflammatory, astringent and local anesthetic properties.

Resin + bee wax + jaggery are heated with ghee and applied.

Fungal infections of the nails and skin

Tincture of myrrh mixed with calendula is applied.

It is dissolved in breast milk and dropped into the eye in purulent ophthalmia (inflammation of the eye).

Punarnava + Bhallataka Semecarpus anacardium kernels + Jungli erandi Jatropha curcas root are crushed, made into a decoction and then into a thick paste by adding Commiphora myrrha gum resin. This is given twice a day for rheumatism and nervine pain.

Scabies, itches, all types of wounds

Bola + Kali Mirch + Vidang + Sarson ke daane + Motha + Gandhak + Kushtha + Pencil cactus + Haldi + Kapur + Suhaga + Nila- tutiya sulphate of copper are taken in equal amount and powdered. This is mixed in coconut oil and kept in sunlight. This is further heated in iron vessel and applied on the affected areas.

It is used as food flavoring and added in limited amount.

In USA it is used in alcoholic beverages.

In Europe it is added to toothpastes.

The Dosage of Myrrh