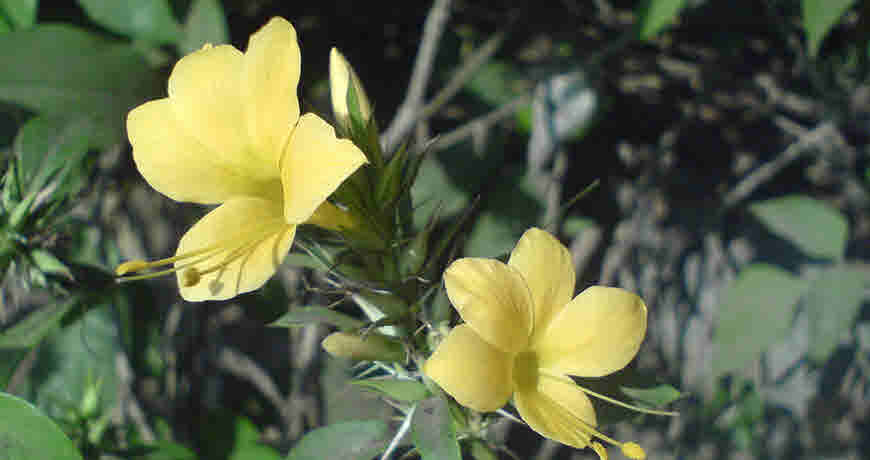 Its Sanskrit name is Vajradanti, which literally means one which makes Danta (teeth) as hard as Vajra (diamond). The leaves are boiled with Kattha and used for rinsing mouth. This stops bleeding from gums and makes teeth strong. Barleria is also useful in acute and chronic congestion of the liver, jaundice, urinary and paralytic affections and in cardiac, renal and hepatic dropsy.

Barleria prionitis is grown as an ornamental and medicinal plant in Asia. It is an erect, bushy, prickly undershrub reaching up to 0.6-1.5 m high and found throughout hotter parts of the country and also cultivated as a hedge plant.

It can be considered an annual or perennial plant.  During the dry season its stems, leaves, and flowers die off but the roots remain alive. The vegetation regrows during the rainy season.

Spines: Pale in color, 1-2 cm long; present at the base of leaves.

divided almost to the base, one of the outer sepals rather more than 1.3 cm long, the opposite sepal rather less than 1.3 cm long, 3.4 mm broad, both oblong-lanceolate, mucronate; the 2 inner sepals 1.5 mm wide and as long as the shorter of the outer ones, linear-lanceolate, mucronate; corona, 3.2-4.5 cm long, yellow, slightly pubescent outside, glabrous inside, somewhat 2 lipped; upper lip 2 cm long or more, deeply 4 lobed, the lobes oblong-obovate, round; lower lip oblong-obovate, round, entire; tube 1.9 – 2.2 cm long; stamens 2 fertile and 2 staminodes; filaments of the fertile stamens exerted beyond the corona tube, those of the staminode very short. Ovary superior of two fused carpels; style, simple, usually long with two stigmas.

All plants are scientifically classified into main 7 levels. These levels are the Kingdom, Division, Class, Order, Family, Genus, and Species. A genus comprises of many species and the botanical name consists of Genus (uppercase) followed by Species (lowercase). Genus consists of many species which are closely related and have lots of similarities. Species is the lowest level and represents the group of the same plants.

The botanical name of Vajradanti is Barleria prionitis. It belongs to plant family Acanthaceae. Below is given a taxonomical classification of the plant.

It does not contain any alkaloidal principle but a large amount of neutral and acid resins.

Sahchara is sweet, sour and bitter in taste, hot in potency and pungent after digestion (Katu Vipak). It balances Kapha and destroys the poison. It is especially useful in dental problems and gout.

It is a Katu Vipak herb. Vipak refers to post-digestive (effect after digestion/cooking of Rasa) effect of tastes after its mixing with digestive juices. It is the long-term effect of the herb.  Katu Vipak herbs increase dryness in the body.

Barleria prionitis is rich in medicinal properties. The understanding of these properties will help us to better utilize this herb. These also indicate the conditions in which we should avoid it.

Leaf juice + sugar is given.

Fresh juice of the bark is given.

The bark powder is taken in a dose of a half a teaspoon twice a day.

The juice of the leaves is applied to bleeding gums.

A paste of the root is applied.

Leaf juice 2 tablespoons + honey is given twice a day.

The leaf juice or leaf paste is applied.

The paste of leaves is applied topically.

A plant decoction is prepared and taken internally in a dose of 50-100 ml.

Dried powder of the plant are taken in a dose of 6 gm with honey.

The shoot tips are chewed.

A decoction of the root is used as a mouthwash.

Leaf juice is dropped in ears.

The root decoction is given.

Powder of shade-dried plant with cow milk is taken orally.

The leaf paste is externally applied on the skin.

21- Strengthening the gums, tooth-ache due to caries

A toothpaste made of the astringent leaves and common salt is used.

Leaf juice is given.

The root is chewed as a toothbrush.

24- Toothache due to cavity

The leaf is bruised or juice extracted is in kept in the tooth cavity with or without Akarkara root.

25- Watery swelling and pain all over the body

Root and leaf (20 gm each) are made into decoction in water. A decoction is taken with cardamom powder twice a day for three days.

The Dosage of Barleria prionitis

The leaf juice is given internally in a dose of 5-20ml.

A decoction prepared from the plant are given in a dose of 50-100ml.