Learn what are health benefits and medicinal uses of Kundali plant. Learn how to use this plant to treat diseases like rheumatism, dropsy, dyspepsia and chronic diarrhea. Know about it's botanical description, medicinal properties and side-effects.
Anupama February 7, 2017 August 12, 2018

Azima tetracantha plant is found in Southern India, Sri Lanka, Philippines, Central and South Africa. It is a medicinal plant and the roots, leaves and milky juice are of therapeutic importance. 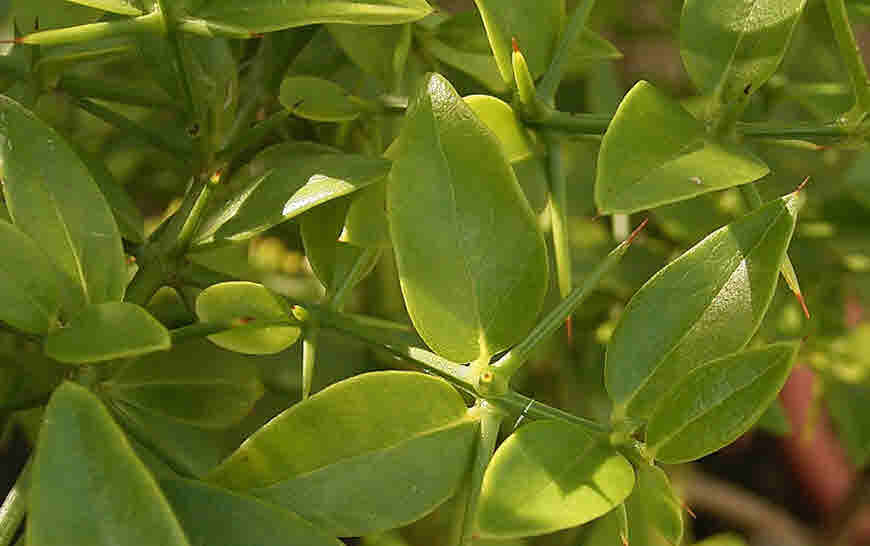 The leaves root, and milky juice are bitter in taste. The leaves possess diuretic action. Diuretics, also known as water pills promote diuresis, that is, the increased production of urine. They work on kidneys by increasing the amount of salt and water that comes out through urine. Diuretics helps in the high blood pressure, glaucoma and edema.

The leaves are also administered with food as a remedy for rheumatism, and their juice to relieve cough. The plant is used in South India as a uterine contractor.

Plant Description: It is a scrambling, deciduous, dioecious shrubs, with axillary spines.

Branches: Green herbaceous, the branchlets are divaricate and tetragonous. Young shoots pubescent, glabrous afterwards; spines in each axil 1-2 in. number, half to l in. long.

Bark: Light brown, rough, wood white, soft, consisting of concentred layers in which the pores, surrounded by white loose tissue, are alternately scanty and many.

Spines: Often in whorls of 4.

The botanical name of Kundali / Azima plant, is Azima tetracantha. It belongs to plant family Salvadoraceae. Below is given taxonomical classification of the plant.

Azima tetracantha is rich in medicinal properties. The understanding of these properties will help us to better utilize this herb.

The root, root bark sap and leaves of Kundali / Mulluchangu / Mulsangu / Uppimullu or Azima, are used both internally and externally. It is used as a folk medicine in India, Sri Lanka and Africa. Due to its powerful diuretic activity, it is given in rheumatism, dropsy, dyspepsia and chronic diarrhea. It is also given as a stimulant tonic after confinement. The leaf juice given internally relieves cough phthisis and  applied as eardrops against earache.  The crushed leaves are placed on painful teeth.

Roots of (Azima tetracantha + Gardenia resinifera + Flueggea leucopyrus + Cyclea peltata + Flacourtia montana + Ixora coccinea + Melastoma malabathricum) and bark of Erythrina variegata bark are taken  in equal quantity. They are ground with rice washed water and taken once a day for 40 days from the 4th day of menses.

Leaves are prepared to decoction and consumed as an effective remedy

The leaves juice is used as ear drop.

The leaves are also administered with food as a remedy for rheumatism.

The Root paste is applied on the affected body part and infusion of roots is given internally.

The root decoction is taken internally.

The sap of the plant are applied topically.

Plant decoction is given as uterine tonic after delivery.