Amla or Indian gooseberry is the fruit of the tree Emblica officinalis. These small, sour green fruits are not only eaten fresh but also in form of chutney, murabba, candies, and powder. It is a boon for health and possesses immunity-boosting, antiaging, antimicrobial, and anti-inflammatory activities. Amla is useful against several diseases and does not produce any side effects. it is a rich source of ascorbic acid (juice has 20 times ascorbic acid more than orange juice). 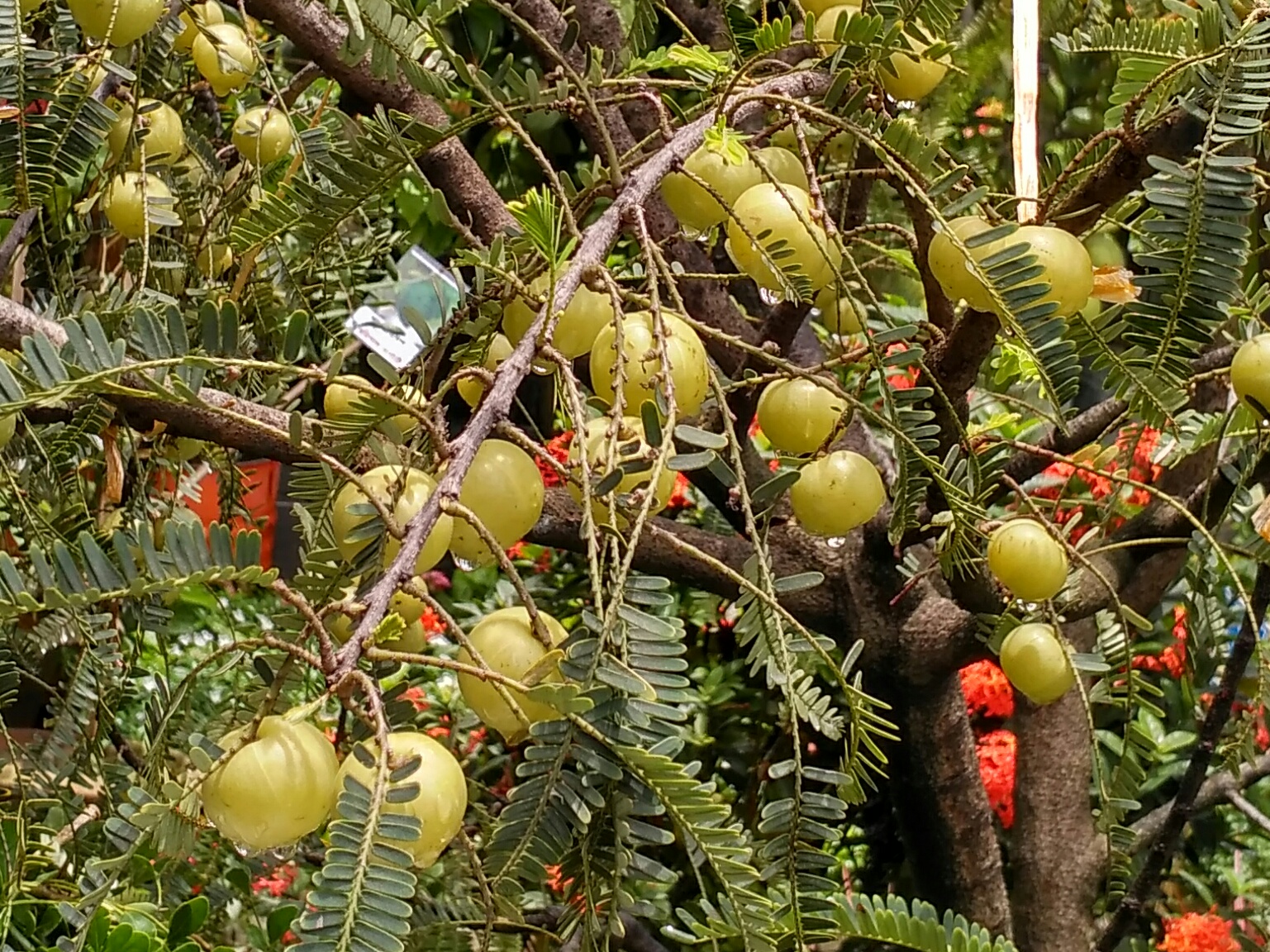 It is a medium-sized tree. Its leaves alternate, bifarious, pinnate, and is flower-bearing. It has numerous leaflets. Flowers in the male are very numerous, but in females, flowers are few. Flowering in plant starts from August to September, and fruits are from October to February. It grows to the height of 8-18 meters. It has a crooked trunk and spreading branches. It has yellow-greenish fruits. The fruit is spherical pale yellow with six vertical furrows. The mature fruits are hard and do not fall for the gentle touch. The average weight of the fruit is 60 -70 g. It has gray bark and reddish wood. Its leaves are feathery, linear-oblong in shape, and smell like lemon. Its wood is hard in texture. It wraps and splits when exposed to the Sun or in excessive heat.

Its green fruit is very acidic. The dried fruit is sour and astringent. Its flowers have a cooling effect. Its bark is astringent.

In Hindu mythology, the tree is worshipped as the Earth Mother as its fruit is considered to be so nourishing as to be the nurse of mankind.

Amalaki:  Means Sustainer or the fruit where the Goddess of Prosperity Resides.

Tree considered sacred by Hindus as God Vishnu is believed to dwell it. The tree is worshipped on Amalaki Ekadashi.

In other Hindu beliefs, amla is said to have originated from the drops of Amrit which spilled on earth accidentally, because of the fight of gods and demons after ksheera Sagar Manthan.

Habitat:  It is found all over tropical and sub: tropical India, Burma, Madhya Pradesh. Its cultivation is common in India mainly in Uttar Pradesh, Tamil Nadu, Karnataka, Rajasthan, and Gujarat.

Amla is a rich source of Vitamin C. It is seen that 100 gm of fresh fruit provides 470-680 mg of vitamin C. The vitamin value of Amla increased further when the juice was extracted from the fruit. The dehydrated berry provided 2428-3470 mg of Vitamin C per 100gm.

It is grown in a subtropical climate. It is a hardy plant, it grows in semi-arid conditions. It grows from seed propagation.

The seeds of Amla contains:

Amalaki (Emblica officinalis) Tinctures are available from various pharmacies such as SBL.

You may take few drops of this mother tincture to get the health benefits of Amla. It will boost immunity and prevent recurrent infection. It is good for the eyes and hair.

Amalaki (Emblica officinalis) Mother tincture is taken in a dose of 6-12 drops in juice or water, under the tongue, or as desired.

It may be taken 3 times daily.

Shake well before use. Store in a cool, dark place. Keep out of reach of children.