Tylophora asthmatica (Antamul) is medicinal perennial vine which is found in eastern, central and southern India, Sri Lanka, Thailand, Malaysia and Borneo. This herb is especially effective in the treatment of bronchial asthma. Various studies have shown that alkaloids of Tylophora indica suppress cellular immune response. 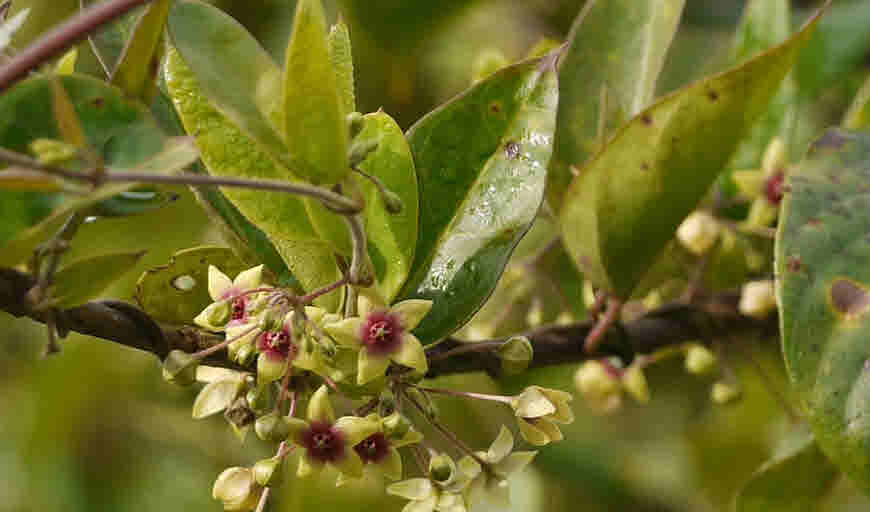 Antamul leaves are expectorant and used to treat respiratory infections, bronchitis and whooping cough. A clinical trial done on asthmatic patients has found that Tylophora indica fresh leaves chewed and swallowed daily with water in the early morning, empty stomach for a week gives moderate or complete relief of asthma symptoms. Its root or leaf powder is used in diarrhea, dysentery and intermittent malarial fever. Antamul has also analgesic property due to which it gives relief in earache, cystitis and lumbago.

Antamul is a small evergreen, climbing shrub. It is found in dry forest of sub-Himalayan tracts of North and East Bengal, Assam, Orissa, Konkan, Deccan, and plains of Tamil Nadu. Its botanical name is from the ancient Greek word tylos = knot and phoros = bearing.

It is called Indian Ipecacuanha, as the roots are used as an effective substitute for Ipecac, which was used to cause vomiting after suspected poisoning. The dried leaves of the plant are used as emetic, and expectorant and indicated in over-loaded states of the stomach and other cases requiring the use of emetics.

Its use to induce vomiting led to the inclusion of Tylophora in Bengal Pharmacopoeia of 1884.

It is a branching climber or shrub that grows up to 1.5 meters. Its leaves are obvate-oblong to elliptic-oblong, 3-10cm long and 1.5-7cm wide. Roots are long fleshy with longitudinally fissured light brown, corky bark. Flowers are minute, 1-1.5 cm across, in 2-3 flowered fascicles in axillary umbellate cymes. Calyx are divided nearly to the base, densely hairy outside, segments lanceolate, acute. Corolla is greenish yellow or greenish purple, lobes oblong, acute. Fruit is a follicle, up to 7 × 1cm, ovoid lanceolate, tapering at apex.

The botanical name of Anthrapachaka / Indian ipecac is Tylophora Indica. It belongs to plant family Asclepiadaceae. Below is given taxonomical classification of the plant.

It should not be used continuously for more than ten days.

Antamul is bitter in taste (Rasa), sweet after digestion (Vipaka), and is a cooling in effect (Virya).

Tylophora indica is rich in medicinal properties. The understanding of these properties will help us to better utilize this herb. These also indicate the conditions in which we should avoid it. For example, it is emetic and causes nausea and vomiting.

Indian ipecac is used in the treatment of bronchitis, asthma, rhinitis, hay fever, allergy of respiratory tract. It has antispasmodic action and antiprotozoal action.

This remedy can be used to cure cough, bronchitis in children. Take 1/4 leaf of Antamul. Grind it and mix with honey. Give this to child.

Take root part of the plant, cut in small pieces and chew twice a day for two days.

Contraindications, Interactions, and Side Effects of Indian Ipecac