Skip to content
Home Ayurveda Know the Isabgol Benefits, Side effects and Dosage

Know the Isabgol Benefits, Side effects and Dosage

Isabgol or psyllium husk is commonly used for getting relief from constipation. It is basically a dietary fiber supplement which is a bulk-forming laxative. Psyllium husk is not fermented in the gut but swells by absorbing the water which increases the stool output. It relieves constipation by mechanically stimulating the intestinal peristalsis. The German Pharmacopoeia indicates that ispaghula seeds are capable of absorbing at least 9 times its own weight in water. The British Pharmacopoeia indicates at least 12 times. Psyllium regulates the function of large bowel. 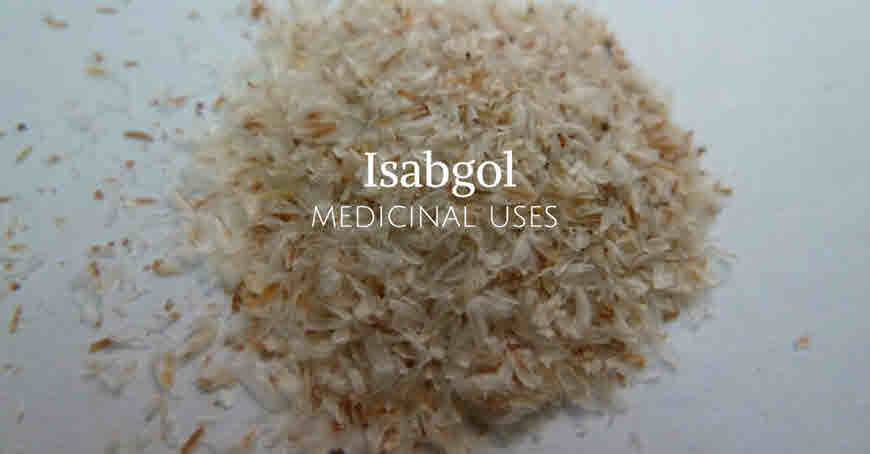 Isabgol is not only beneficial in treating constipation and removing of the body toxins but it is also effective in the treatment of many other disorders. The studies are now proving other medicinal uses of this plant derived natural product.

Psyllium husk is known as Ashvagola or Ashwakarna in Ayurveda which literally means one which have ears like horse (Ashva=horse;Gola=Round and Karna=Ears). It named so perhaps due to appearance of seeds which are concave and elongated like horse ear. Isabgol is its Persian name (asp=Horse, and Ghol=Round). It is known as Aspaghol in Unani, and Isapppa in Siddha.

In Ayurveda, Psyllium is considered cooling, pungent and astringent. It balances all three humors Vata, Pitta, and Kapha. It decreases the swelling of digestive tract and gives relief in constipation and piles. But as it high on fiber, initially may cause gas.

About The Plant Plantago ovata

It is a stemless or sub-caulescent soft hairy or woolly annual herb which attains a height of 30-45 cm. Leaves narrowly linear or filiform appearing whorled due to the short terete stem. The spikes are 1.2-4 cm long and about 0.5 cm broad, cylindrical to ovoid in shape and bear between 45-70 flowers.

Flowers are bisexual, tetramerous, anemophilous and protogynous and as such favoring out crossing. The fruits are ellipsoid capsules, about 8 mm long, obtuse, membranous, glabrous, upper half coming off as a blunt conical lid.

Seeds are ovoid-oblong, boat-shaped, smooth, rosy-white being concave on one side and convex on the other. The concave side of the seed is covered with a thin white membrane produced by fusing of outer layer of ovule together with the inner epidermis, forming the seed coat. The seed epidermis is made of polyhedral cells whose walls are thickened by a secondary deposit which is the source of mucilage.

On mechanical milling, the coating of seed provides the husk, a membranous covering of the seed, white to light pink in color, translucent and odorless.

Parts used:Whole Seeds or Husk of the Seeds.

Psyllium plant is small, stemless, and grows annually. The plant belong to Genus Plantago and family Plantaginaceae. There are about 200 species in this genus and ovata and psyllium are commercially cultivated for obtaining the psyllium husk.

What is Isabgol or psyllium husk

It is now cultivated in many other countries e.g. West Asia, America, Mediterranean countries and Russia. In India it is mainly cultivated in north Gujarat, south-western Rajasthan, Punjab and Haryana states.

The psyllium husk is derived from the seeds of the plant. The outer coat of the seeds are separated by crushing and winnowing.

Composition of Isabgol or psyllium husk

Psyllium has been found to be practically unaffected by the digestive enzymes of stomach and bacteria and passes unchanged through the intestine.

It pass through the small intestine to large intestine. There the husk absorbs water and swells approximately ten times. This causes formation of soft stool bulk and since it is jelly-like so it moves easily. This further causes normal stimulation for bowel.

It takes about half day to cause motion after consuming husk.

In a study by Anderson (2000), a meta-analysis of 8 clinical studies was done, which included 384 and 272 mild to moderate hypercholesterolemic people receiving either 10.2 grams/day psyllium or cellulose placebo, respectively, over a period of 8 weeks or more, along with a low fat diet. They found that psyllium intake adjunctive to a low-fat diet lowered total serum cholesterol by 4% and LDL cholesterol by 7%.

In another meta-analysis of 12 studies, which included a total of 404 mild to moderate hypercholesterolemic people taking 3 g or less of psyllium per day, psyllium intake was found to lower total cholesterol and LDL by 5% and 9% respectively.

The majority of recent clinical studies show psyllium appears to modestly lower total cholesterol levels by anywhere from 3-8% and LDL levels by about 5-13% in mild to moderately hypercholesterolemic patients, with the actual effects depending on the various factors involved in each study.

It is a gentle natural bulk-forming laxative that promote the regulation of large bowel function and gives relief in constipation. It is high in both fiber and mucilage (10–30%). Mucilage is clear, colorless, gelling agent that absorbs the water and increases in volume. So Isabgol softens the stool and at the same time lubricates the passage for easy removal of feces.

It is also beneficial in diarrhea as it slows down the gastric emptying time and colon transit time. In the case of diarrhea 2 teaspoonful of husk should be given with cold water mixed with lemon juice.

It shows blood pressure lowering properties and is useful in hypertension.

Study has shown its blood pressure lowering effect in a 6 months trial on hypertensive and obese patients (Cicero et al., 2007). But some other studies have not shown any changes in blood pressure (Bell et al., 1990). More studies are needed.

But such studies do prove that its use is completely safe and poses no health risk if taken while suffering from high blood pressure and diabetes.

It is useful in the treatment and prevention of following bowel diseases:

In chronic colitis psyllium should be given in a dose of 2 teaspoonful, 3-4 times a day, with buttermilk or curd.

It is very useful for dry and bleeding piles. It prevents and cures constipation. It also cures congestion in the liver and have cooling effect on the body. In piles you may take about 2 teaspoonful of this husk with water or buttermilk three times a day for four-five months.

It regulates blood glucose equilibrium and Lowers blood glucose by allowing slow sugar absorption. Intake of psyllium husk in a dose of 5 grams twice a day, half an hour before breakfast and dinner is effective in significantly reducing Fasting plasma glucose FBS, and HbA1c (Glycosylated hemoglobin). A person with diabetes can daily take this husk for lowering the sugar level. It is safe, effective and natural.

It has blood lipid lowering property. A study (Garvin et al., 1965) show supplementation with 9.6 g psyllium/day for 5 week reduced serum triglycerides by 9%. It has favorable effect on the lipoprotein profile.

In a study, in men with coronary heart disease after a low-saturated-fat, low-cholesterol diet, the incorporation of psyllium husk significantly reduced plasma triacylglycerol concentrations by 6.7%.

It has probiotic effect. It promotes the growth of good bacteria in human gut.

The Dosage of Isabgol or Psyllium husk

Adult 1-2 teaspoonful 2-3 times a day with a glass of water, milk or curd.

Children Half teaspoonful 2-3 times a day with a glass of water, milk or curd.

The powdered seed husk must be stirred in 150 ml water and be drunk immediately, after consumption, a large amount of water should be consumed.

FDA has recently approved the use of the following statement on psyllium products:“3g to 12g of soluble fiber from psyllium seed husk when included as part of a diet low in saturated fat and cholesterol, may reduce the risk of heart disease”.

It can even be taken in pregnancy and breastfeeding.

It is safe, well tolersated, in persons with type II diabetes. It improves glycemic control.

It should always be taken in recommended dose and with milk or water . Cholesterol reduction needs higher doses for optimal effects. For constipation a lower dose will do.

It is high in fiber and absorbs water so it is important to increase the fluid intake.

Use of Blond Psyllium husk up to six months did not clinically alter vitamin or mineral status in a review of eight human trials. It did not reduce absorption of calcium. (J AmGeriatr Soc, 43, 1995;Am J Clin Nutr, 71, 2000;Natural Medicines Comprehensive Database, 2007.)

Sudden increases in dietary fiber may cause temporary gas and bloating. Start with a low dose and one dose per day and increase gradually to allow the gastrointestinal tract to adapt. This also reduces the occurrence of its side-effects.

It is high in fiber so the its fermentation by anaerobic bacteria in the large intestine and may cause increase bloating and flatulence, abdominal pain, cramping and diarrhea.

Allergic reactions to ingestion or inhalation of Plantago products have been reported, especially after previous occupational exposure to these products.

It should always be taken with a sufficient amounts of liquid, e.g. Take 150 ml water/5 g psyllium. Failure to do so may result in swelling of the seed coats and blockage of the esophagus, which may cause choking. Intestinal obstruction may occur if an adequate fluid intake is not maintained.

2. Anderson JW., et al. Long-term cholesterol-lowering effects of psyllium as an adjunct to diet therapy in the treatment of hypercholesterolemia. Am J Clin Nutr. 2000;71:1433-1438.

9. Jenkins DJ, et al. Soluble fiber intake at a dose approved by the US Food and Drug Administration for a claim of health benefits: serum lipid risk factors for cardiovascular disease assessed in a randomized controlled crossover trial. Am J Clin Nutr. 2002;75:834-9.