Learn about Ayurvedic properties and medicinal uses of cinnamon. Know it's home remedies and directions to use and dosage. It is commonly known as Daalcheeni and used as spices.
Anupama October 7, 2014 August 12, 2018

Cinnamon is a commonly used aromatic spice with medicinal properties. It is also known as Dalchini (Hindi) and Twak (Sanskrit). This medicinal herb can be used in the treatment and prevention of many common ailments such as acne, pimples, cough, and digestive troubles. Cinnamon is obtained from many species of the tree belonging to family Lauraceae. 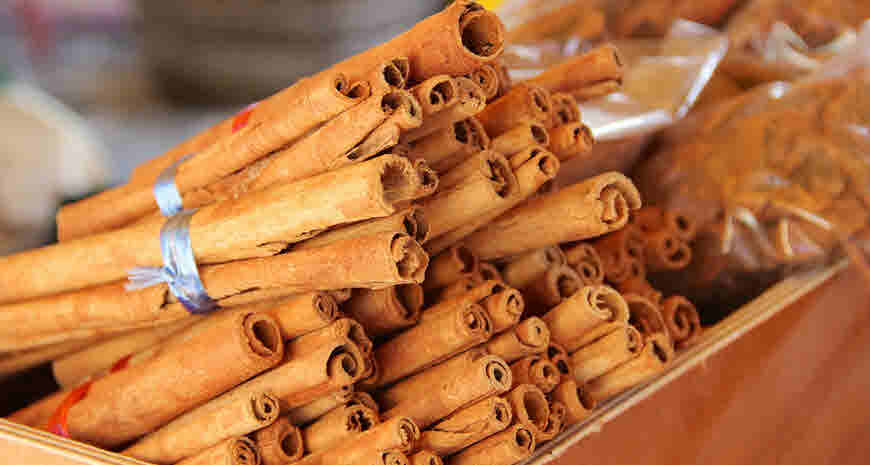 Cinnamon tree is evergreen and about 6-8 m high. The bark of the tree is collected during April-July and October-December. In India, cinnamon trees are cultivated on the Western Ghats and adjoining hills.

Cinnamon tree has deeply veined ovate leaves. The leaves are dark green underneath. Bark and leaves of the tree are aromatic. The flowers are small yellowish to white in color and have unpleasant odour. The tree also bears dark purple berries. The tree grows to a height of 6-8 meters. The inner bark of the tree is collected and used as spice.

The major constituent of essential oil (about 75%) is Cinnamaldehyde.

Cinnamon or dalchini is pungent, sweet and astringent. It is hot in potency. It increases Pitta but decreases vata and Kapha. It promotes digestion and cures indigestion.

Dalchini is also used in preparation of Ayurvedic medicines which are used to treat digestive and respiratory ailments. Important formulation of Ayurveda that contain this medicinal spice are Sitopaladi churna, Chaturjat Churna and Vyaghri Haritaki.

Cinnamon is a useful medicinal spice. You can use it as home remedy to treat many common ailments. Here is given, how to use dalchini for the treatment of cough, diarrhea, acne, tastelessness, sleeplessness, etc.

Loss of taste:Make a paste of honey and dalchini. Rub this paste on the tongue and keep for a few minutes.

Tooth ache:Mix cinnamon powder and honey in 1:5 ratio and apply at area of tooth ache

For hair fall:Mix cinnamon powder and honey with warm olive oil and apply on scalp and wash after 15 minutes.

Bad breadth:Chew cinnamon or boil cinnamon powder one teaspoon in 150 ml water and use as mouthwash.

Improving complexion:Mix honey and cinnamon powder and apply on the face. Keep on the face till it dries. Wash with plain water.

Hoarseness and aphonia:Take a glass of water add cinnamon powder and black pepper, boil it and take with honey.

Insomnia or sleeplessness:Boil 2 grams cinnamon powder in one cup water for five minutes. Add honey and drink before going to bed.

Arthritis pain:Take 1 tbs cinnamon powder with 2/3 water and 1/3 honey and make paste and apply at place of pain.

Cinnamon tea is very good for overall health. This tea can be used as wash to prevent and cure fungal infections such as athlete’s foot.

Cinnamon is hot in potency so it should be taken in the recommended dosage (1-3 grams) only. It should be used cautiously in bleeding disorders and excessive Pitta.