Ashok tree is a very well-known tree. It is a sacred tree in Hinduism. Ashok is worshipped in Chaitra month of the Hindu calendar. Kamdev the Hindu God of love and sexuality, carries five arrows decorated with five kinds of flower in his quiver. Ashok blossom is one of them. 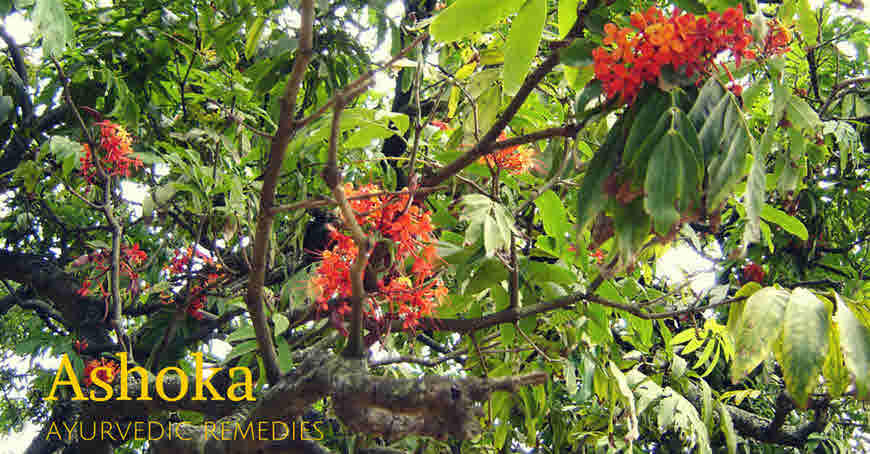 Ashok tree is also a medicinal tree and used in Ayurveda, Siddha and Unani or treatment of a variety of diseases related to bleeding and urinary problems. In Ayurveda, it is used since time immemorial as a medicine. Charak and Sushruta used the flowering buds, seeds and bark in internal prescriptions for arthritis, sciatica, neuralgia, neurological affections, hemorrhages and gynecological disorders.

Ashok tree is one of the main herb for gynecological disorders and for uterus health. Ashok is effective in treating menstrual disorders associated with excess bleeding (rakta pradar), pain and congestion.

Ashoka tree bark is a uterine tonic and gives relief in uterine spasms, dysmenorrhea, prolapse, miscarriage and irregular menstrual cycles. The bark has diuretic properties and indicated in scanty urine, calculus and also for other urinary disorders. Ashok works because it has stimulatory effect on the ovarian tissue, and exhibit an estrogen like activity that enhances ovulation and repair of the endometrium. Its intake boosts fertility and increases the chances of conception.

Aromatic flowers are regular, bisexual numerous and in large bunch. Each bunch consists of a lot of small flowers that are shaped like long-tubes which open out into four oval lobes. Flowering takes place throughout the year. The flowers are yellow initially and then changes to orange to crimson.

Stamens are 7 with very long purple filaments, much exserted, spreading, inserted on a fleshy lobed ring at the mouth of calyx-tube. Anthers are purple to black in color. Ovary is superior, stalked, unicarpellary, unilocular with marginal ovules, occupying the position of the uppermost eighth stamen, pubescent, style strongly curved into a ring.

Bark is channeled, externally dark green to greenish grey in color. It is smooth with circular lenticels and transversely ridged. Sometimes the bark cab be cracked. Internally, it is reddish-brown with fine longitudinal strands and fibers. A thin whitish continuous layer is seen beneath the cork layer. The bark tastes astringent.

There is another very common ornamental tree which people recognized as Ashok. But Sita Ashok or Real Ashok is completely different from this tree. The Latin name of false Ashok is Polyalthia longifolia.

The botanical name of Ashoka / Ashok, is Saraca asoca. It belongs to plant family Caesalpiniaceae. Below is given taxonomical classification of the plant.

Ashok is combined with many other supporting herbs for specific diseases.

Saraca asoca is rich in medicinal properties. The understanding of these properties will help us to better utilize this herb. These also indicate the conditions in which we should avoid it.

Saraca indica, is anti-estrogenic. It reduces the estrogen level in the body. High level of estrogen in women is responsible for bloating, breast tenderness, low libido, irregularity of periods, headaches, mood swings and increase of weight.

Ashok bark is astringent, bitter in taste (Rasa), pungent after digestion (Vipaka), and is cool in effect (Virya). It is a Sheet Virya herb. Sheet Virya or Cool potency herb and subdues Pitta (Bile). Sheet Virya herb gives nourishment to the body and steadiness. It supports the building of the body fluids.

Ashok tree bark is especially useful in the treatment of gynecological conditions such as endometriosis, cyst, fibroids, leucorrhoea, lower back pain, excess heat in the body, etc. It is very helpful in menorrhagia.

Menorrhagia (from Latin Meno=of mestruation and -Rrhag=to burst) is the medical condition of abnormally heavy or prolonged bleeding at menstruation. Menorrhagia also is known as Rakta yoni and Asrgdara in Ayurveda. Ashokarishta, which is decoction of Ashok bark along with many supporting herbs, is given to treat the same. This medicine is effective in curing infections of the uterus.

Ashok helps in abnormal vaginal bleeding due to its astringent action. It is an effective uterine tonic and strengthens the muscles of the uterus. It corrects the irregularity of periods and prevents miscarriage. Ashoka Ghrita is given after second trimester to prevent miscarriage.

If a woman has weak uterus muscles due to which she is suffering from miscarriage, she should take it regularly.

Ashoka does not causes contractions. The bark is stimulant to the endometrium and ovarian tissue.

It clears congestion and calms the nerves. It is a cold potency herb and pacifies excess pitta inside the body and hence gives relief in burning sensation in the body.

Ashok bark, detoxifies the body and improves the skin complexion.

Ashoka is highly regarded medicinal tree universally. This plant is the source of various types of compounds effective in the treatment of various diseases. Ashoka is being used since ancient time as medicine and proven in modern era.

Here I am writing some simple home remedies of Saraca asoca tree. Mainly Ashoka tree bark, flowers, roots and seeds are used in treatment. You can get these directly from tree (flowers and seeds in season) and bark any time. You can also get Ashoka products in (like bark, flower, seeds in powdered form) market.

Make Ksheerapaka (Ksheerapak means pak / cooking in Ksheer or milk) of Ashoka bark. Boil 6 gm ashoka bark powder in 500 ml cow milk and 500 ml water till it reduces to half. Add some sugar and filter it. Drink this regularly, it is suggested to drink it daily for 3 days in every three months for normal menses.

Ashok Ksheerpak should be taken.

All kind of the skin infections

Boil Ashoka bark in water and use this water to clean skin conditions and wounds.

Crushed flowers and leaves are rubbed on the skin.

Coconut oil in which flowers are boiled is applied topically.

The infusion of flowers of Ashok and leaves of Henna in coconut oil is applied.

Make paste of Ashoka roots and apply on the affected body areas.

Take 1-2 gm of Ashok seeds and make its paste in water. Take 2 spoon of this.

The tea prepared from Ashoka bark is given in a dose of 15-25ml.

Make paste of bark by soaking it in water for whole night and apply on the affected area. This will really help in recovery and provide relief from all kind of pain.

The leaves can be used to treat intestinal parasites.

The Dosage of Saraca asoca