Polianthes tuberosa is commonly known as Rajanigandha in India due to its night blooming fragrant flowers. It is a small bulbous herb reaching up to a height of 2-3 feet. It bears aromatic flowers and generally grown for the oranmental purpose. The waxy, white and fragrant flowers on long spikes are mostly used as cut flowers for making garlands and extracting the essential oil. There are also a few medicinal uses of Polianthes tuberosa. Flowers are used in the perfume industry and also a diuretic and emetic activity. Bulbs are used as anti-gonorrhea, diuretic, emetic and for curing rashes in the infant. 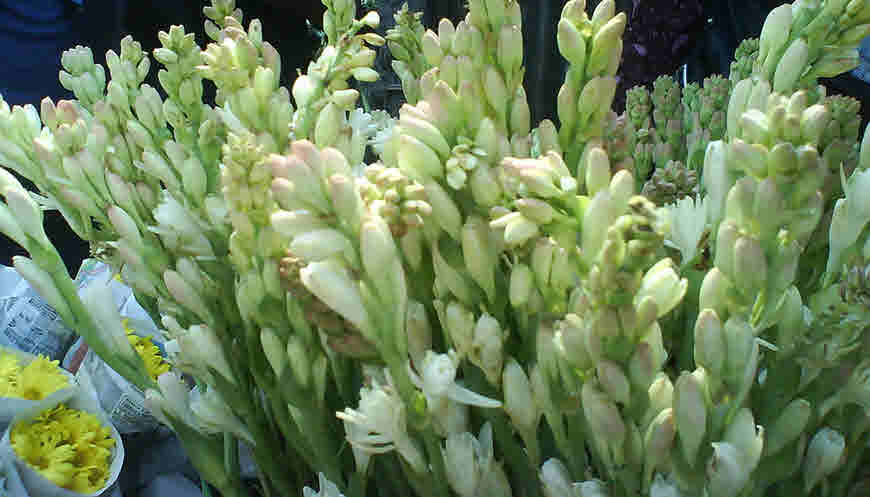 Polianthes tuberosa is night-blooming plant believed to be native to Mexico. It prefers sunny places and bloom in late summer. The bulbs of the plant are perennial and sown in fertilized soil in full sun.

How to Grow Rajnigandha

Polianthes tuberosa is grown from its bulbs during spring season when the temperature is not so low. This plant belongs to hotter parts of the world and prefers temperature above 15°C.

All plants are scientifically classified into main 7 levels. These levels are the Kingdom, Division, Class, Order, Family, Genus, and Species. A genus comprises of many species and the botanical name consists of Genus (uppercase) followed by Species (lowercase). Genus consists of many species which are closely related and have lots of similarities. Species is the lowest level and represents the group of the same plants.

The botanical name of Rajnigandha is Polianthes tuberosa L. tuberose. It is a Monocot and belongs to plant family Agavaceae. The word Polianthes means “many flowers” in Greek and tuberosa refers to tuberous roots of the plant.

Below is given a taxonomical classification of the plant.

Polianthes tuberosa is used as folk medicine in many countries. The bulbs are used as a remedy for gonorrhea.

The bulbs are rubbed with turmeric and butter and applied to remove small red pimples of new-born children.

Bulb are also rubbed into a paste with the juice of Durva grass (Cynoclon dadylon) and applied to a swollen inflamed lymph node in the armpit or groin.

The tubers are made into a poultice and used as maturative for the formation of pus in boils and abscesses.

Boiling water (2 cups) poured over flowers and buds (1 cup) can be used externally for acne, enlarged pores, and oily skin.

Tuberose essential Oil obtained from the scented flowers is very expensive. In aromatherapy, it is used management of anxiety, stress, anger, confusion, emotional disturbances, and insomnia. The essential oil is found to be active against gram-positive and gram-negative bacteria.

Flowers and bulbs are diuretics.