Gingko is the most frequently prescribed herbal medicine in Germany, and one of the most commonly used over-the-counter herbal preparations in the USA. It promotes good health by protecting all the important body organs. It is good for brain, memory, sensory organs, eyes, and blood. Gingko boosts memory, and delays dementia. It is a brain tonic that increases memory, and boosts oxygen level in the brain. 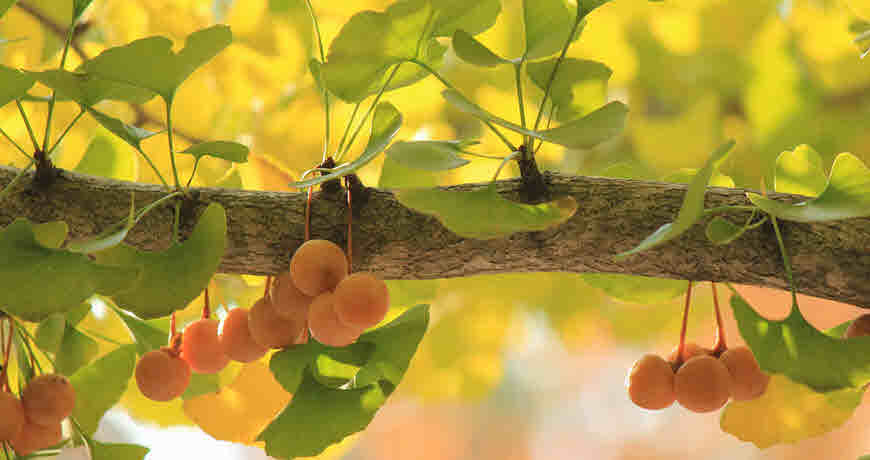 It is a strong antioxidant, and protects against free cell damage. Ginkgo leaf extract is believed to improve cognitive function in people with symptoms of age-related mental decline. Ginkgo regulates neurotransmitters, increases blood flow, and metabolism. It reduces migraine and vertigo.

Ginkgo biloba is the world’s oldest living tree species native of Chekiang in East China. It has remained practically unchanged for over 200 million years in the wild, and in sacred Buddhist monasteries of China. It is contemporary of dinosaurs of the Jurassic period. It is known as living fossil because of its primitive characters. In Ginkgo the male, and female flowers are borne on separate trees. The fan-shaped leaf, has veins that arise from the stem base, branching dichotomously out to the edges.

This living fossil, and its extract are over 200 million years old, and are used extensively in Chinese, and Japanese medicine. The nuts are edible, and used against cancer in China. This tree was introduced into Europe as ornamental tree in parks, gardens, and city streets in early 1730, and later in America. Modern researches has discovered a range of medicinally active compounds in various parts of tree.

Ginkgo is an ancient dioecious slow growing tree with pyramidal form, reaching a height of 30 m. Its leaves are petiolar with lamina fan-shaped, and bilobed. It is dioecious. The mature seeds are orange-colored, and are about the size of an apricot.

Ginkgo is a Gymnosperm. Gymnosperms were dominant in the Mesozoic Era (about 252.2 million to 66 million years ago). They are vascular plant that reproduces by means of an exposed seed, or ovule. They bear naked seeds which are borne in cones, and are not visible until they are mature whereas in Angiosperms, seeds are enclosed by mature ovaries, or fruits.

Ginkgo is dioecious with separate female, and male sexes.

Female tree do not produce cones. Two ovules are formed at the end of a stalk, and after pollination, one or both develop into seeds. The seed is 1.5-2 cm long. Its outer layer, the sarcotesta is light yellow-brown, soft, and fruit-like. It is fruits is plum like in appearance but the seed coat contains butanoic acid, and smells like rancid butter when fallen on the ground. The Ginkgo tree does not reproduce until it is about 20 years old, and continues to do so after it has reached 1000 years of age.

The botanical name of Ginkgo is Ginkgo biloba Linn. It belongs to plant family Ginkgoaceae. Below is given taxonomical classification of the plant.

Why Ginkgo is called Living Fossil?

Ginkgo biloba is regarded as a living fossil.

Living fossils are those species which appeared on earth in prehistoric ages as evidenced by the discovery of their fossils from some places, and are still living with very little or no change.

Ginkgo has no close living relative. The fossilized ginkgoes which are found are 100 million years old. All species, except this tree are wiped during the last glacial period. This tree is the only existing species of its genus. Some living specimens of this plant may be as much as 3,000 years old.

Since it is the single existing, living species of the plant family Ginkgoaceae, which appeared in Permian age, it is known as living fossil.

The Dosage of Gingko Extract

It is most commonly available as capsules, which contains extracts of Ginkgo Biloba. The capsules can be taken in a dose of 1-2 capsules daily or as directed by health care professional.

The most suitable dosage according to condition is given below:

Gingko is rich in medicinal properties. The understanding of these properties will help us to better utilize this herb. These also indicate the conditions in which we should avoid it. For example, it is thrombolytic, antiplatelet, and its oral intake may raise the risk of bleeding especially while taking blood-thinners, such as warfarin (Coumadin), clopidogrel (Plavix), and aspirin.

The oil containing Ginkgo is used in the treatment of Alopecia as it improves cerebral microcirculation, and hence increases oxygen supply. The drug is extracted in coconut oil, and is massaged for at least 2 minutes to prevent hair fall.

Ginkgo biloba Extract is used in the treatment of a variety of diseases including:

Ginkgo biloba extract are made from the leaves of the tree. Ginkgo leaf extracts are used in the brain disorders such as dementia, disturbance in concentration, depressive emotional conditions, dizziness, tinnitus, and headache. The extract has beneficial effects on the circulatory system especially in geriatric patients. Recently a pill containing extracts from Ginkgo has been launched for eliminating excess fat (cellulite) in women.

Ginkgo Biloba extracts are available in India in the form of tablets / capsules.

Contraindications, Interactions, and Side Effects / Adverse effects of Ginkgo