The date palm tree is known as Phoenix dactylifera botanically. It is considered as one of the oldest and main staple and ancient crops in Southwest Asia and North Africa. Dates are the main fruit in the Arabian Peninsula. These are used as a staple food in the Middle East for thousands of years. 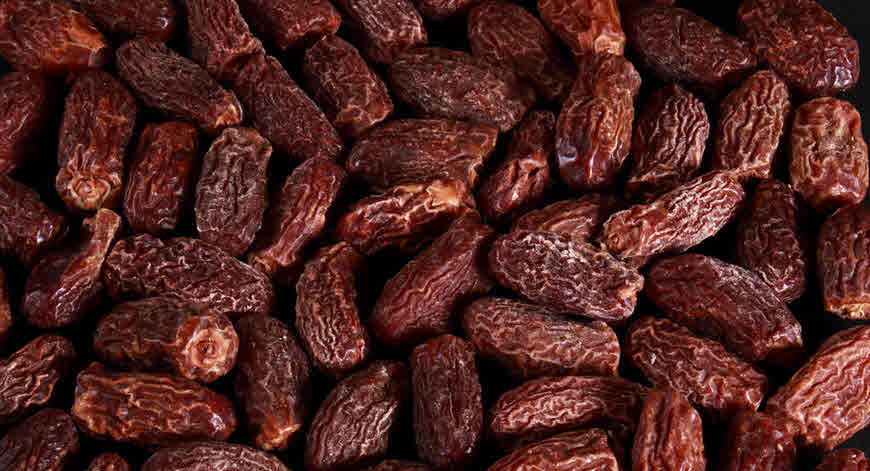 Dates act as a potent antioxidant, anti-tumor, and anti-inflammatory action. It has medicinal value in various types of disease prevention. It has antioxidant activity due to the presence of a wide range of phenolic compounds including p-coumaric, ferulic, and sinapic acids, flavonoids, and procyanidins. It has thirteen flavonoid glycosides of luteolin, quercetin, and apigenin at different stages of maturity.

Dates belong to the family Arecaceae or Palmae. The name dactylifera (date-bearing) originates from two Greek words, dáktulos or date.

The date is a delicious fruit. It has a sweet taste. It is consumed in various ways:

It is taken with Arabian coffee, milk, or yogurt. It is also consumed in a processed form where it is taken in form of paste, syrup, pickles, jams, and jellies. It is also used in various bakery items like chocolate, honey, and vinegar. Its consumption is maximum in months of “Ramadan” when dates are commonly taken to break the fast.

About the plant: It is 21-31 meters in height, which grows singly or forming a clump with several stems from a single root system.

The date is a staple food in the Arab world for centuries. It is considered an ideal food as it consists of various nutrients.

Habitat: It is found in Northern Africa and the Middle East.

Other names: Tree of life, Bread of Desert

The date is one of the oldest cultivated plants in the world. This fruit was highly esteemed by the ancient civilizations more than 5000 years ago. The whole parts of the date palm are useful. It is widely grown in the hot arid regions.

Kimri: Which is green and unripe variety.

Khalal- Which is full-size and crunchy.

Rutab- Which is ripe and soft in variety.

Tamar- Which is ripe and sun-dried.

It is seen that during the ripening process the fruit starts losing its moisture content and its sugars are converted to glucose and fructose.

Dates contain 70% of carbohydrate. It includes sugars, sucrose, glucose, and fructose. Sugars found in dates are easily digested. It helps in the release of energy. Glucose and fructose which are present in date flesh are readily absorbed during the process of digestion. It helps in the rapid elevation of blood sugar levels.

It contains vitamin A, A1, B, B1, B2, B3, B5, B6, and C as well as a variety of amino acids. These vitamins and minerals help the body produce hemoglobin, which is a protein in red blood cells that binds to oxygen and carries oxygen from the lungs to tissues.

It contains potassium which is an essential mineral that helps in proper muscle contractions. Potassium is also necessary for a healthy nervous system. Soluble fiber has been shown to help control diabetes by decreasing high blood sugar as well as lowering high cholesterol, specifically low-density lipoprotein (LDL) cholesterol. Insoluble fiber increases the body’s ability and the rate at which food is processed through the digestive system. The flesh of dates contains 0.2 /0.5% oil, whereas the seed contains 7.7 /9.7% oil.

The protein content of date fruit is between 1-3%. It is seen that protein and lipid contents increase after drying. This occurs as a result of the loss of moisture.  The average protein content of fresh and dried dates is 1.50 and 2.14 g/100 g. Lipids are found in the skin of date.

Dates contain high levels of selenium, copper, potassium, and magnesium, moderate concentrations of manganese, iron, phosphorus, and calcium, and small quantities of boron. It is the ideal food for patients with high blood pressure as it contains a high amount of potassium and low sodium content.

It also contains boron which is useful in the treatment of cancer of the brain.  The date can be used as a practical supplement for iron deficiency without any side effects such as nausea, headache, and anorexia that may occur with iron tablet supplements.  At least six vitamins (thiamine, riboflavin, niacin, ascorbic acid, pyridoxine, and vitamin A) have been reported to be present in dates in visible concentrations. Dried dates can be regarded as a moderate source of vitamin riboflavin, pyridoxine, niacin, and folic acid. Thiamine, ascorbic acid (vitamin C), and vitamin A are present in relatively low concentrations in dried dates.

It is a good source of phenolics.