Vidang is used in Ayurveda especially for treating intestinal worms. It is the main herb of Ayurveda that effectively treats intestinal parasites (tapeworm, ring worm). The dried mature fruits or seeds are used for this purpose. These seeds look similar to white pepper seeds. They have brownish-black color and measure about 2-4 mm in diameter. Their surface is warty with a beak like projection at apex. The outer covering or pericarp is brittle and encloses a single seed covered with thin membrane. 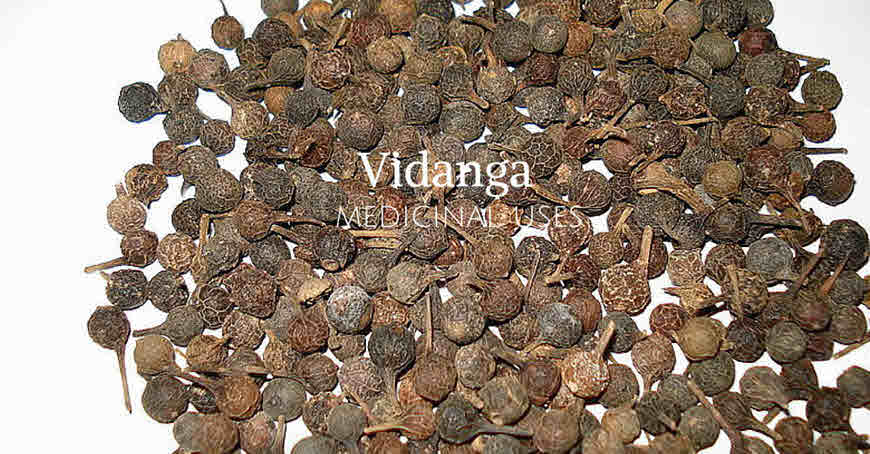 Acharya Sushrut described the seeds of Vidang as anthelmintic, alterative and tonic. He recommended their use along with liquorice/mulheti root for the purpose of strengthening the body. Its use for expelling intestinal parasites is also recommended by Acharya Charak and Vagbhatta.

For expelling intestinal worms, the powder of the seeds are given with honey, or as an infusion of the seeds. It is given early in the morning empty stomach followed by some purgative.

Embelia ribes is found in the hilly parts of India, from the central and lower Himalayas down to Konkan, Deccan, Western Ghats and South India. It is commonly seen in places up to the height of 1500 m.

It is also found in Sri Lanka, Singapore, Southern China, south to Indonesia and some parts of Africa.

Seeds:They are used as local application in ringworm and other skin diseases.

For the medicinal purpose the berries/fruits, leaves and roots of the plant are used. The plant is pungent, astringent, hot, and reduces phlegm and pitta. It has action on plasma, blood, excretory and digestive system.

Vidang is used in Ayurveda since ancient time to treat diseases of the skin, abdomen, excessive phlegm and intestinal parasites. It has numerous medicinal properties and among them the important ones are anthelmintic, carminative, antibacterial, antibiotic, hypoglycemic, and antifertility properties.

It has anti-implantation, anti-ovulatory, anti-spermatogenic, and anti-androgenic activities. The plant possess anti estrogenic and a weak presentational activity in rats and causes a disturbance in the hormonal levels. It have a direct action on the behavioral system which act on hypothalamus and releasing factors thereby interfering the secretion of gonadotropins.

The properties and uses of the plant are mentioned in Materia Medica of Ayurveda. According to Bhavaprakasha nighnatu, Vidang is pungent, removes morbidity, improves blood circulation, stimulates appetite, acts against phlegm, makes the body light, and kills worms of all types.

Rajanighantu describes it as pungent, hot, light, enhances balance between wind and phlegm, beneficial in anorexia and improves digestive power.

The powder of Fruit expels tapeworms within 6-24 hours. Fruit powder taken with curd in empty stomach is effective against giardia (intestinal infection caused by a microscopic parasite).

In skin diseases, insect bites, scorpion stings and swelling the paste of fruits is applied externally on the affected areas.

Vidangarishtha:10-15 ml with an equal amount of water twice a day.

Seed/Fruit powder:2-5 grams, with 5 grams honey for two consecutive days empty stomach in the morning. A suitable purgative such as castor oil should be taken hours after intake of powder.

Side effects if Vidanga

Embelia ribes has the following side-effects. Please keep these points in mind while using Vidang or a medicine containing it as an ingredient.

The fruits significantly affects male fertility. It is an antifertility agent. It impairs Spermatogenesis and reduces sperm count to level of infertility. Though anti-spermatogenic changes are found to be reversible without any toxic effects.

The plant parts also show anti-fertility effects in females. It has effects that changes the uterine environment which inhibits the process of implantation. It has anti-implantation and anti-ovulatory effects. It also has oxytocic effects (Hastens or facilitates childbirth, especially by stimulating contractions of the uterus).