Orchis latifolia Linn. is commonly known as Panja, Salam-Panja, Salep, Hath-Panja or Hatajari. It got all these local names due to its hand like roots. The appearance of its root is like a palm with fingers. Salam-panja is found in Himalaya at altitudes of 2, 500-5000m in damp places. It is an orchid plant and bears purple flowers. It has fleshy tuberous roots. These roots are used for medicinal purpose. 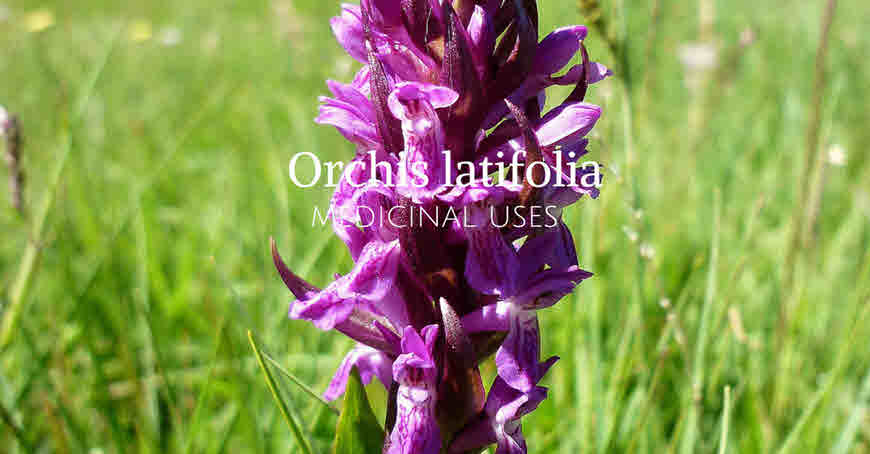 In Unani, the roots of the plant are considered aphrodisiac and nervine tonic. The roots are cooling, emollient, aphrodisiac, rejuvenating and tonic.

Perennial herb, up to 60 to 70 cm in height;palmately lobed, Fleshy, tuberous divided root tubers;leaves many, erect, oblong broadly lanceolate arranged more or less along the stem;Flower: dull purple in spikes.

The roots of the plant are used Ayurveda, Siddha and Unani for the treatment of many diseases. They are used to cure dysentery, diarrhea, chronic fever, cough, stomachache, wounds, cuts, burns, fractures and general weakness.

The root tubers are rich in starch, mucilage, sugar, phosphate, chloride and glucoside-loroglossin. They yield a ‘Salep’ which is used in traditional medicine.

Salep is used as food, expectorant, aphrodisiac and as a nervine tonic. The dried and ground root powder is taken with milk to increase vigourness. It is ingredient of many Unani medicines which are used for sexual weakness, low sperm count and spermattorrhoea.

Roots have astringent and aphrodisiac properties. Clinical trial shows that the herb is also used to increase the testosterone level and also help to increase sexual desire.

The roots are cooling in nature.

They are Tonic, rejuventive and used in the treatment of wasting diseases.

The Dosage of Root powder

The root powder is used in a dose of 3-5 grams. Generally one teaspoon root powder is cooked in one cup milk and given for diabetes, dysentery, diarrhea, weakness and all kind of wasting diseases.

Badola HK, Aitken S (2003). The Himalayas of India: A treasury of Medicinal plant under siege. Biodiversity, 4:3-13