Oleander is found all over India. It is an ornamental plant and commonly seen in gardens and on road sides. There are three common varieties of oleander plant available (with white, yellow, red flowers) and all are poisonous. The leaf intake causes vomiting, lightheadedness, and heart block. It is known as Ashwamarak in Sanskrit which means one that kills horse. The intake of only fifteen grams of fresh leaves of this plant can kill a horse. 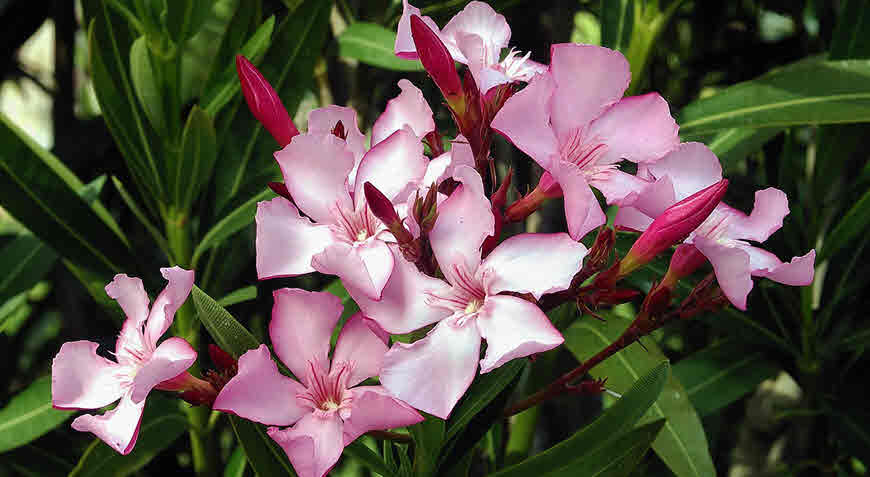 All parts of Oleander plant produce poisonous latex. The kernel possess nearly seven times as much glycosides as leaves, stems, flowers or fruit pulp. The roots and bark also contain glycosides. The glycosides of the plant have direct effect on heart. It produces a fall in right arterial pressure and a rise in cardiac output.

In Ayurveda, white Oleander is used in the treatment of functional disorders of the heart, in cardiac insufficiency and skin diseases.

Kaner/Oleander is a large glabrous, evergreen, woody shrub with milky juice, found throughout the year in upper Gangetic plains, Himalayas from Nepal to Kashmir up to 2000 m, Central and Southern India;also cultivated near the temples and gardens.

Below is given taxonomical classification of the plant.

Vernacular names of Kaner in India

Ornamental shrub or small, densely branched tree, 1 to 10 m tall in the Dogbane family Apocynaceae. Leaves are in pairs of three or whorled, very green, leathery, narrowly elliptic to linear entire. Flowers grow in clusters in terminal branches, each 2.5 to 5 cm, funnel-shaped with five lobes, fragrant, various colors from pink to red, white, peach, and yellow.

The leaves and roots gave a number of active principles including glycosides, terpenoids, sterols and other compounds.

In Ayurveda, the roots, leaves and bark of Karvira/Nerium oleander are used for medicinal purpose. These are used in very precise dosage. The dried roots powder in dosage of 30-125 mg, is used for head ache, parasites, inflammation, itching and diseases of the skin.

The dried leaf powder in dosage of 30-125 mg, is used for diseases of heart, fever, parasites, diseases of the skin, diseases of eyes, wounds and asthma. The leaves are first detoxified as per Ayurvedic treatise.

Below is given few remedies using Nerium oleander/Kaner. These are given just for information purpose. Always remember all parts of oleander plant are poisonous. Always wash your hands after touching any part of the plant.

The paste of flowers can be applied on the face.

The paste of roots are applied externally on the hemorrhoids.

The paste of leaves is mixed with oil and applied on the affected joints.

The decoction of white flowered Kaner is boiled in ‘Rai ka tel’ to make medicated oil. This oil is applied at affected body areas.

The medicated oil prepared from the leaves paste of Kaner is applied externally.

Juice prepared from the stem bark is boiled with gingelly oil and two drops are poured into ear to treat ear pain.

The paste of roots is applied externally.

The decoction of leaves is used to wash the affected areas.

Externally apply the juice of leaves.