Nut-grass or Motha can be seen growing as weed in garden, lawn, fields and waste lands. It looks like grass and have tuberous roots underground. It is a perennial plant. Its blackish tuberous roots have distinct smell due to the presence of essential oil. These rhizomes roots are rich in medicinal properties and used in Ayurveda for the treatment of diseases since time immemorial. They are used fresh and dried. For the medicinal purpose the dried powder or decoction of roots are prescribed. 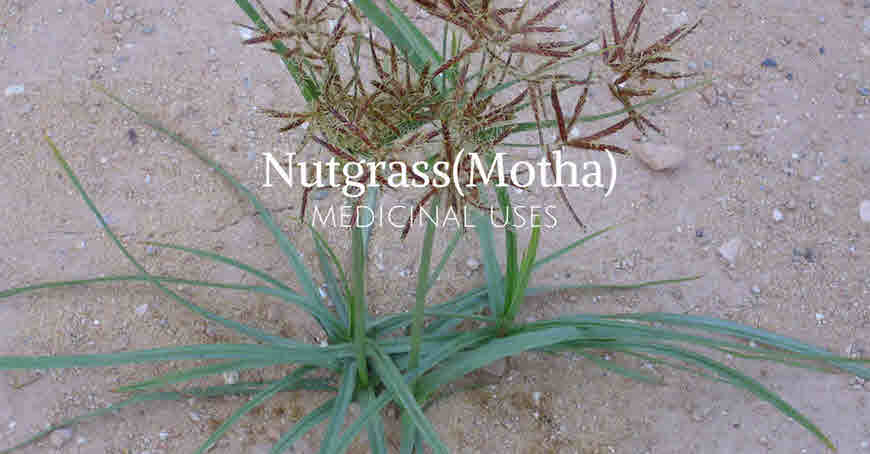 In Ayurveda this plant is known as Mustak or Motha. It is used in the treatment of a variety of diseases. It is one of the best herb for treating many female disorders like yeast, candida and premenstrual syndrome. It is also used for menopause, menstrual disorders, dysmenorrhea, and breast tumors. Mustak/Nut-grass is used alone or in combination with other herbs for treating digestive disorders, pain in abdomen, low appetite, digestive weakness, indigestion, malabsorption, diarrhea and bleeding dysentery. Animal studies show oral administration of roots breaks the lipids and mobilizes the fat from adipose tissues and thus helps in reducing obesity. Another study shows, the daily intake of Motha root powder (1 gram, three times a day) and Ashwagandha powder (1 gram, two times a day) shows good result in rheumatoid arthritis.

The botanical name of Motha is Cyperus rotundus Linn. and it belongs to the family Cyperaceae.

Cyperaceae or sedge family comprises of monocotyledonous flowering plants. The plants of this family are grass like and found especially in wet regions throughout the world. It is among the 10 largest families of flowering plants, containing about 5, 000 species. In genus Cyperus, there are nearly 650 species.

Cyperus rotundus taxonomic classification is as given below:-

Habitat: Indigenous to India, and found in tropical, subtropical and temperate regions.

Found throughout the plains of India up to an elevation of 1800 m;grow in waste grounds, gardens and roadsides, and similar places.

Drug consists of the rhizome and stolon. Rhizomes bluntly conical and vary in size and thickness, crowned with the remains of stem and leaves forming a scaly covering, dark brown or black externally, creamish-yellow internally;odour, pleasant.

Mustak or Motha is Pungent, bitter and astringent. It is cold in potency and increases Vata dosha if taken in excess. It pacifies Pitta, and Kapha dosha.

Motha roots contain several active chemical constituents. Due to the presence of these constituents the roots possess following medicinal properties. These properties are scientifically proven by various scientific studies.

For the medicinal purpose the tuberous roots of the plant are used. They are used internally as well as externally. The decoction of Motha roots with honey is prescribed in diarrhea. In diarrhea with mucus and pain, Motha roots are boiled in milk and given.

One or two crushed tubers boiled with about 200 ml cow milk are given in stomach disorder.

The dried root powder is given in a dose of 5 grams with Butter milk 3-4 times a day.

Nutgrass improves intestinal absorption and stops diarrhea. The decoction of nutgrass root is taken in dosage of 30ml two times a day.

The decoction of nutgrass is beneficial.

The juice of nutgrass is highly health promoting.

For fever, the decoction of nutgrass root is taken in dosage of 30ml.

The roots are ground and taken with honey in a dose of one teaspoon.

The paste of fresh roots is applied on breasts.

The root paste is applied on the affected places.

Caution, Side-effects and Contraindications of Nagarmotha