Alpinia galanga is commonly known as Greater Galangal (English) and Kulanjan (Hindi). It is a member of the rhizome family (to which Ginger, Turmeric belong) and is also used as an ingredient in Thai cuisine. The tuberous root of Alpinia galanga is used to treat respiratory and digestive ailments. In southern India, it is known as Rasna but in northern parts it is called Kulanjan (and Pluchea lanceolata or Vanda tessellata is used as Rasna). 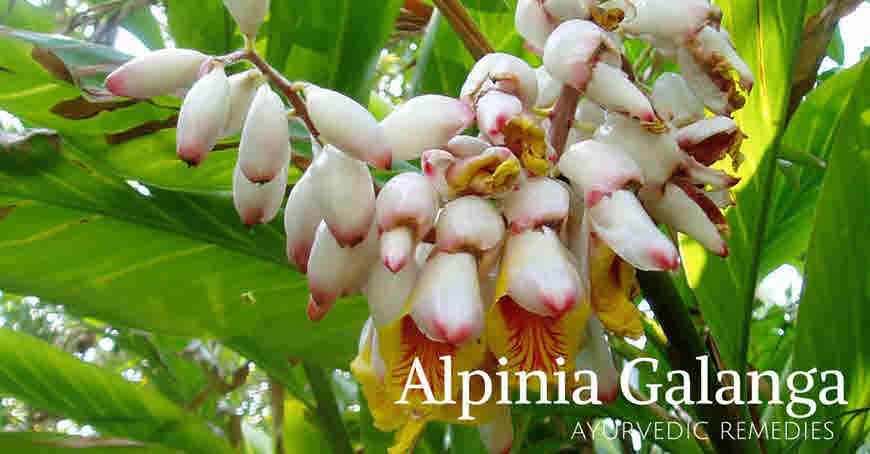 For the medicinal purpose the dried rhizomes of the plant are used which can be taken in dosage of one to three grams, in powder form and 50-100 ml decoction.

The plant is distributed in Himalaya and Southern region of Western Ghats in India. It is often cultivated in Konkan and North Kanara.

Greater Galangal has an antioxidantproperties due to the presence of six diarylheptanoids. It is rich in flavonoids, which have lipid-lowering benefits. The roots contain essential oil, containing? – pinene, ? – pinene, limonene, cineol, terpinen – 4 – ol and terpineol.

Greater Galangal is an antioxidant. An antioxidant is a substance that that inhibits oxidation or reactions promoted by oxygen and peroxides, and thus protects the living body from the deleterious effects of free radicals. It has anti-inflammatory properties. It reduces swelling and used to alleviate muscle and joint aches.

Studies confirm that this medicinal herb inhibits the synthesis of fatty acids and lowers lipid levels.

It is a digestive tonic that promotes appetite and relieves flatulence. It is also possess abortifacient (means a drug that causes abortion) properties so it is used in child birth. This also means it should be avoided during pregnancy. The paste of whole plant with honey is used to decrease urine production and also to treat whooping cough.

The dried rhizome of Greater Galangal is pulverised to get the powder. This powder is used for medicinal purpose. Here is given few remedies which can be done at home to treat some common ailments.

Phlegm, cough, chest congestion, asthma, respiratory ailments:Greater Galangal has an antioxidant expectorant and antimicrobial properties. It is hot in potency and reduces cough. For using it in respiratory ailments, take half teaspoon of crushed galangal and put in one glass hot water. Allow this to infuse for 3-4 hours. Drink this infusion after adding honey or sugar.

Throat irritation, bad breath:Ayurveda recommends use of this herb for voice and oral problems. For this purpose chew a small piece of the rhizome.

Gum problems:Prepare a decoction and use this for gargling at frequent interval.